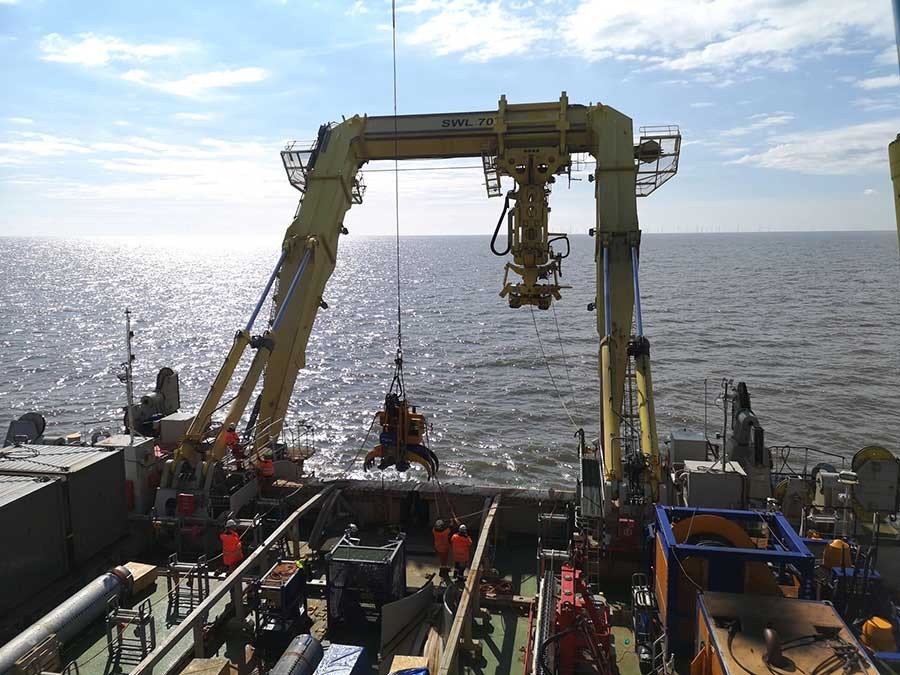 Operating in water depths of 12-15m, Rotech’s RS2-3 was launched into the North Sea by vessel crane where it was suspended, traveling along the half a kilometre of cable to complete de-burial operations. With a total excavation depth of 2m required, the depth was monitored in real time using a tool-mounted sonar imager, with the de-burial completed in two passes.

“With hard soils expected, this promised to be a challenging project. In preparation we deployed an extra RS2 excavator to have on standby to give the option of using the tools in twin ‘TRS2’ configuration to give maximum flow.

“Despite hard, sticky clay experienced, the works were carried out in just two passes, one with the RS2-3 hybrid solution, which boasts a maximum outlet pressure of 300kPa and a max jet flow of 4000L/s, and one pass with the TRS2 configuration capable of 8000L/s of flow.”

Launched from the vessel stern, Rotech’s bespoke RSG-C spread of equipment grabbed, cut and recovered the de-buried cable to deck successfully and safely.

Rotech Subsea’s in-house research, development and engineering team has created a suite of 18 sector-leading non-contact CFE, Suspended Jet Trenching tools. With enhanced capabilities, Rotech Subsea’s CFE suite of tools is firmly established as the method of choice for offshore wind farm cable trenching and excavation in Europe and beyond.