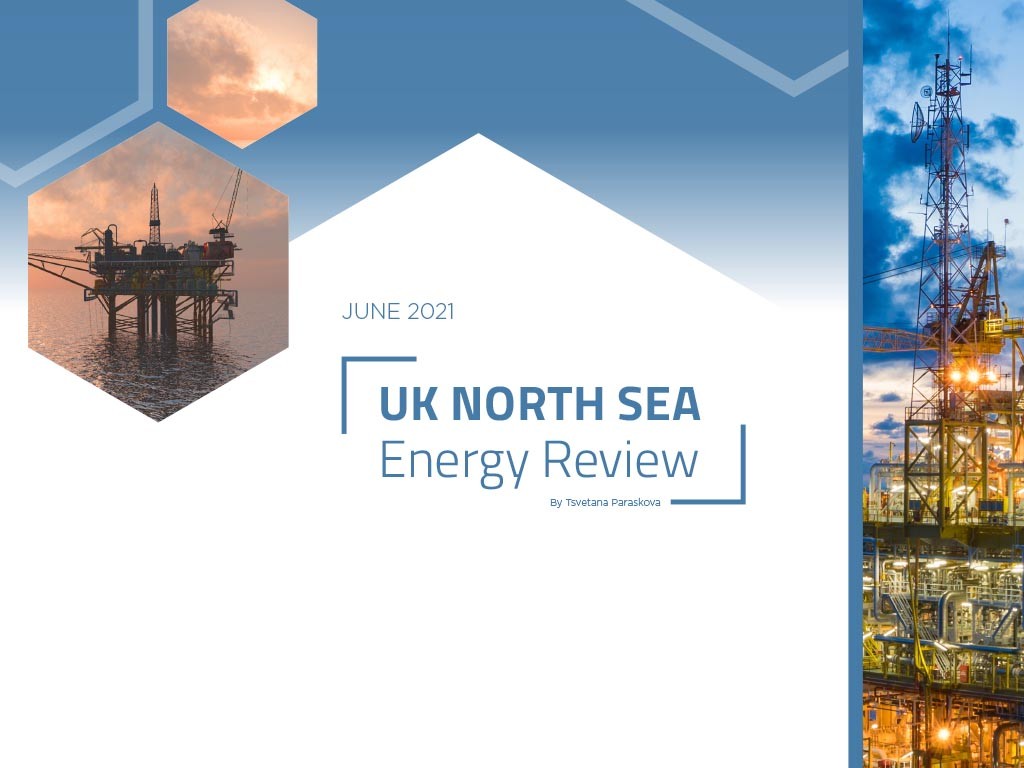 The implications of a net-zero emissions world in 2050 on the UK offshore industry and supply chain, the strong first-quarter results of the key UK-listed operators in the North Sea, and a number of field development and ownership updates were the main themes in the UK oil and gas sector last month.

The International Energy Agency (IEA) published in the middle of May a stunning new report, in which the Paris-based agency created to safeguard global energy supply after the oil embargo in 1973 suggested that the world’s pathway to net-zero emissions doesn’t need any new investment in oil, gas, and coal. The report in which the IEA said that “Beyond projects already committed as of 2021, there are no new oil and gas fields approved for development in our pathway, and no new coal mines or mine extensions are required,” drew reactions from nearly every stakeholder in the oil and gas industry.

OGUK, the leading body of the UK offshore oil and gas industry, also issued a response to the landmark report.

“We strongly agree with the International Energy Agency’s recommendations that renewable, CCUS and hydrogen investment and development needs to be rapidly ramped up and that low emissions oil and gas from domestic production is to be favoured over high emissions options such as imports,” OGUK Sustainability Director Mike Tholen said.

“It is appropriate we use our own resources and invest locally, not only to meet our energy needs from now until beyond 2050 but to support UK jobs, the economy and our homegrown energy transition too. Stopping local exploration would be a major drawback for the energy transition underway – reducing the UK’s resilience and increasing our reliance on imports from countries whose carbon emissions we cannot control and that have lesser environmental regulations,” Tholen added.

OGUK also commented on the Queen’s Speech which included a point that the UK’s Ten Point Plan for the Green Revolution would “help create and support up to 250,000 highly-skilled green jobs in the UK and spur over three times as much private investment by 2030.”

“OGUK is clear that this can spark a UK-led global clean energy revolution, with the UK oil and gas sector at its heart,” said OGUK CEO Deirdre Michie.

“Building on this reinvigorated recognition for joint working to tackle climate change, the challenge now is now to work with government to champion the implementation of the recent North Sea Transition Deal and in so doing, accelerate the drive for the sustainable future we all want to see,” Michie noted.

Following the results of the Scottish Parliament election, OGUK urged all parties to support the sector and its world-class supply chain in order to realise homegrown greener energy.

“Our supply chain companies who are already well on the journey need the support of the Scottish Government to ensure we all deliver a turbo-charged transition. This will help move faster towards a low-carbon future, developing homegrown greener energy and reducing reliance on imported oil and gas,” OGUK’s Michie said.

The Oil and Gas Authority (OGA) published in early May its new Decommissioning Strategy stressing that the market could face higher decommissioning costs if action is not taken to improve commercial practices. Actions that could help foster a competitive and sustainable market include increased collaboration between operators and supply chain including new procurement models; the use of campaigns to coordinate multiple projects through which the supply chain would be given greater certainty about upcoming work; and data transparency.

“The Strategy emphasises the significance of decommissioning to deliver maritime restoration as part of the UK’s energy transition to net-zero and it also highlights emerging opportunities to reuse or repurpose infrastructure and reservoirs. The OGA is working with industry to ensure that the right infrastructure is retained for reuse or re-purposing including in net-zero projects,” the authority said.

In company news, bp and Shell, two of the biggest oil and gas operators in the UK North Sea listed in London, reported a strong set of first-quarter results as higher oil and gas prices helped them boost earnings and cash flows.

bp reported underlying replacement cost profit at US$2.6 billion for Q1 2021, triple the profit for the same period of 2020, as well as a surge in operating cash flow to US$6.1 billion from US$952 million for Q1 last year. Having achieved its debt-reduction target earlier than planned, bp resumed in the second quarter share buybacks worth US$500 million.

“With the acceleration of divestment proceeds, together with strong business performance and the recovery in the price environment, we generated strong cash flow and delivered on our net debt target around a year early. We are commencing share buybacks in the second quarter which, alongside our resilient dividend, support the growth in distributions to shareholders,” CEO Bernard Looney said.

Shell, for its part, reported a surge in adjusted earnings for the first quarter and lifted its dividend by 4%. Shell also reported a 32% annual rise in cash flow from operating activities (CFFO) at US$8.294 billion. Free cash flow generation helped Shell reduce its net debt to US$71.3 billion at end-March 2021, down from US$75.4 billion at the end of the fourth quarter of 2020.

In field development news, EnQuest announced it had signed an agreement with Whalsay Energy Holdings to purchase their entire 100% equity interest in the P1078 licence containing the proven Bentley heavy-oil discovery. The discovery is within around 15 kilometres of EnQuest’s Kraken and Bressay operated interests, offering further long-term potential development opportunities and other synergies.

Reabold Resources, investor in upstream oil and gas projects, said at the end of April it had conditionally offered to acquire up to an additional 13.12% of Corallian Energy shares from existing Corallian shareholders, in exchange for Reabold shares. By potentially increasing its position in Corallian, Reabold would be increasing its economic interest in the Corallian-owned Victory Gas Discovery, West of Shetland, in which Reabold management sees significant value.

Jersey Oil & Gas introduced a Carbon Policy, saying that all existing JOG operations would be carbon neutral from the point of first oil for Scope 1 and 2 emissions. JOG also targets to identify Scope 1, Scope 2, and material Scope 3 emissions through the scrutiny of its operational activity both offshore and onshore.

A week later, JOG announced it had concluded the Concept Select phase of a field development plan for the Greater Buchan Area and plans to progress into Front End Engineering and Design (FEED) later this year.

Another operator announced plans this month to reduce its carbon emissions. NEO Energy published its Low Carbon Transition Plan (LCTP), under which it would seek to reduce the carbon intensity per barrel of oil equivalent produced by NEO’s portfolio by 50% by 2030. To achieve this, NEO will invest in technology and systems, such as the full or partial electrification of operations. NEO also says it is aligned with the UK’s net-zero by 2050 target and is proactively working with partners, regulators, and industry bodies to play its part in achieving this goal.

Neptune Energy has acquired a 38.75% equity interest from Spirit Energy in the Pegasus West discovery and surrounding acreage in the UK Southern North Sea. Pegasus West was discovered in 2014 and is currently operated by Spirit Energy. Neptune will work closely with Spirit Energy on FEED studies in 2021 with the intention to reach a final investment decision by year-end. Once sanctioned, Neptune would become operator of the development through to first gas and into production.

Gas company IOG announced that, as operator of its joint venture with CalEnergy Resources, it had awarded the Phase 1 Duty Holder contract for Installation and Pipeline Operator, as well as facilities operations and maintenance (O&M), to ODE Asset Management (ODE AM).

Maersk Drilling was awarded a one-well UK contract by INEOS to employ the harsh-environment jack-up rig Maersk Resolve for drilling and hydraulic stimulation at the Breagh Alpha A11 well in block 42/13 of the UK North Sea. The contract, with US$11.3 million, is expected to commence in Q3 2021, with an estimated duration of 140 days, and includes four additional one-well options.

Finder Energy has completed the acquisition of two highly prospective UK North Sea operated licences from Azinor Catalyst Limited. Licence P2502 is located on the western edge of the East Shetland Basin in the Northern North Sea, while licence P2524 is located on the southern flank of the South Viking Graben in the Central North Sea.

“We expect to announce further North Sea acquisitions as well as new partnerships in the near future,” Finder Energy’s CEO Damon Neaves said.

Tailwind has agreed to sell its entire working interest in the Conwy field to Eni UK with effect from 1 July 2021, subject to regulatory approvals. Conwy has had an excellent safety and production record under Tailwind ownership but now the asset fits more readily into Eni UK’s Liverpool bay operation, Tailwind said.

Deltic Energy announced that Shell U.K. Limited, its Joint Venture Partner and Operator of Licence P2252, had appointed Fugro GB North Marine Limited to carry out geophysical and geotechnical site survey works over the Pensacola Prospect in preparation for the drilling of the Pensacola exploration well. The site survey is expected to start at the end of July and be completed in the third quarter of 2021.