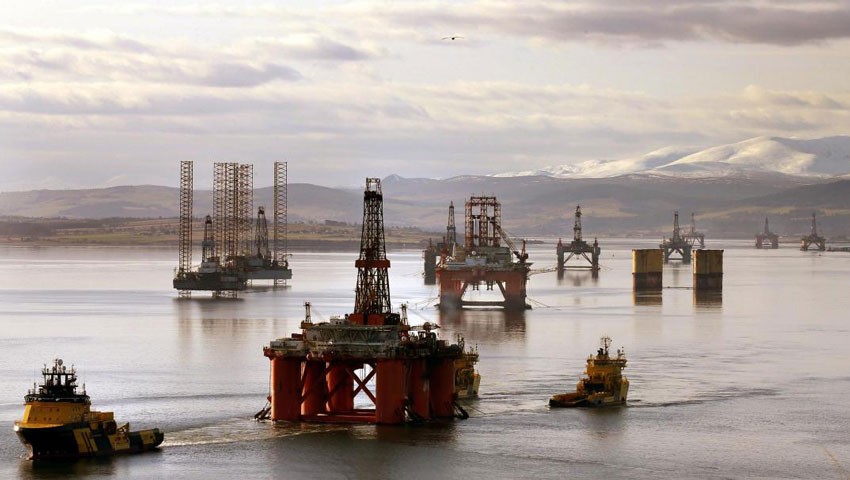 Deep in the North Sea, 150 miles directly east of Aberdeen, lies an enormous and as yet undrilled gas field called Jackdaw.

Its owner Shell has described the field as "critical" to its North Sea strategy.

But Europe's largest oil and gas group isn't giving up, submitting revised proposals and, as a spokesperson told Sky News, continuing to "work with the regulator to explore options around developing the Jackdaw field".

In a recent report the company referred to Jackdaw as a "critical longevity bridge" and there was a "a finite window in which to economically develop" the field.

The report says that Jackdaw not only allows Shell to "maximise economic recovery" of fossil fuels in the North Sea, but also buys time for the potential development of renewable energy.

So will Jackdaw become the new Cambo, the controversial oil field from which Shell withdrew last year amidst a massive public and political backlash?

Or will it be one of the 10 to 12 others up for final approval in 2022 that attracts the headlines, perhaps like Equinor's Rosebank field?

Everyone accepts that the North Sea is a declining basin, but right now the government is balancing on a perilous tightrope, caught between allowing fossil fuel companies to extract the last possible profits for shareholders, and trying to maintain a position as a global climate leader with ambitious net zero carbon emissions targets.

The two positions, campaigners argue, are not compatible.

But gas is particularly tricky because its restricted availability and rising price is feeding a cost of living crisis.

A group of MPs calling themselves the Net Zero Scrutiny Group have insisted that more extraction in the North Sea will help to ease the pain.

The MPs are among those who believe that more domestic gas is a necessary part of the transition to net zero - a "bridge" fuel to fill in the gaps while renewables are scaled up and made more reliable.

Twenty of them recently wrote to a national newspaper, saying: "We are seeing the effects of high gas demand and limited supply in the international markets, pushing wholesale energy prices to historic highs.

"This leads to the inescapable conclusion of the need to expand North Sea exploration and for shale gas extraction to be supported.

"It is no accident that American consumers pay a mere tenth of what we do for gas. There seems little sense, on any environmental assessment, in importing gas and thereby reducing energy security, increasing risks of price volatility, adversely affecting our balance of payments and exporting jobs."

But many reject these arguments on the basis that the energy market is a global one so more gas from the North Sea won't necessarily help UK consumers, and that investing heavily in any fossil fuel will jeopardise progress on renewables and therefore the net zero by 2050 target.

Energy and Climate Energy Unit think tank analyst Jess Ralston told Sky News: "The expected hike in gas bills between April last year and this year is solely down to gas being an internationally-traded commodity whose price has shot up due to global demand and Russia turning down the flow to Europe for its own geo-political purposes.

"Further exploration in the North Sea - with the UK currently exporting 20% of the gas it produces - would neither bring additional near-term gas supplies, nor properly shield UK households against future global price shocks.

"On top of this, the economics of further drilling are weak.

"To protect gas bills from future spikes, the simple answer is to use less of the stuff which means insulating leaky homes and shifting away from its use for heating."

Director of the Conservative Environment Network Sam Hall, reflecting the voice of the greener wing of the party, wrote this on the Conservative Home website: "Conservative MPs were right last weekend to highlight that affordability is a critical energy policy goal and that steep bill rises should be curbed.

"But this can and must be pursued in tandem with our net zero goal, which insures us against much greater economic costs and national security impacts in the future due to dangerous levels of climate change.

"But even if we'd offered more tax breaks to North Sea producers and somehow overcome the various economic, environmental, and political barriers to fracking, it is highly unlikely that the UK could have produced sufficient gas to make a significant dent on the 400 per cent increase in natural gas wholesale prices currently being experienced in the European market to which we are connected via multiple pipelines and whose prices we therefore follow.

"The fact is that if we'd had more renewables on the grid, and had put in place a long-term set of financial incentives for homeowners to insulate their homes, we'd have lower demand for gas for heating and power now and therefore be less exposed to the current price rises."

This row is not going to go away.

Whatever the practical and political arguments, as the cost of living crisis bites, the North Sea will become even more of a battle ground than it already is, and increasingly dangerous territory for Boris Johnson.