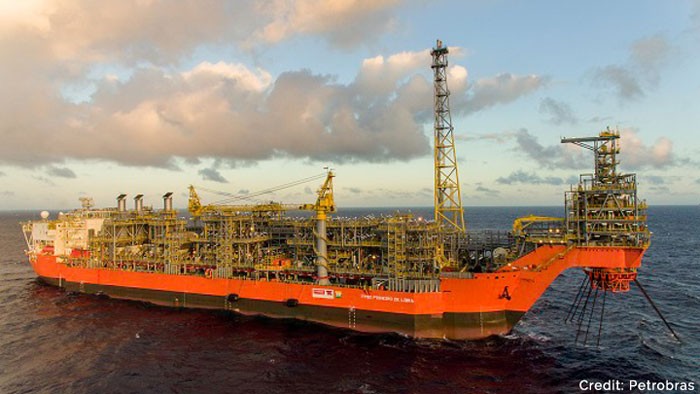 Petrobras and its partners have taken an investment decision for the second phase of the Mero project in the ultra-deepwater Libra block in the presalt Santos basin offshore Brazil.

According to partner Total, the decision follows the start-up of the early production system FPSO Pioneiro de Libra on the field in November 2017, and sanction for the first full phase of the project (Mero 1) soon afterward.

SBM Offshore has signed a letter of intent with Petrobras for a 22.5-year lease and operate arrangement for the FPSO Mero 2.

This will be designed and constructed using SBM’s Fast4Ward program, also applied to the Liza field development in the Stabroek block offshore Guyana. It involves provision of a newbuild, multi-purpose hull combined with various standardized topsides modules.

“The decision to launch Mero 2 comes as a new milestone in this large-scale project that will develop the giant oil resources of the Mero field, estimated at 3-4 Bbbl,” said Arnaud Breuillac, president Exploration & Production at Total.

“The Libra consortium can leverage the excellent productivity of the field to develop a major oil project with technical costs below $20/bbl and low breakeven…Once the full potential of the field is developed, production should reach more than 600,000 b/d.”

The Pioneiro de Libra, which has a capacity of 50,000 b/d, is producing as expected and delivering data on the field, reservoir and productivity of the wells.

Following the launch of Mero 2, Total added, the partners expect to add two further FPSOs of similar capacity, with all four production units deployed on the Mero field in the northwestern part of the Libra block.

The central and southeast panels will remain under exploration until 2020.

Other partners in the Libra consortium are Shell, CNOOC, and CNPC. Pré-Sal Petróleo manages the Libra production-sharing contract.

Bruno Chabas, CEO of SBM Offshore, pointed out that the award of the latest FPSO marked the company’s re-entry offshore Brazil, historically one of its most important markets.

Eduardo Chamusca, country manager Brazil, added: “We see this as the start of a new growth phase in one of SBM Offshore’s home markets, supported by around one-third of SBM Offshore’s global manpower in Brazil.”