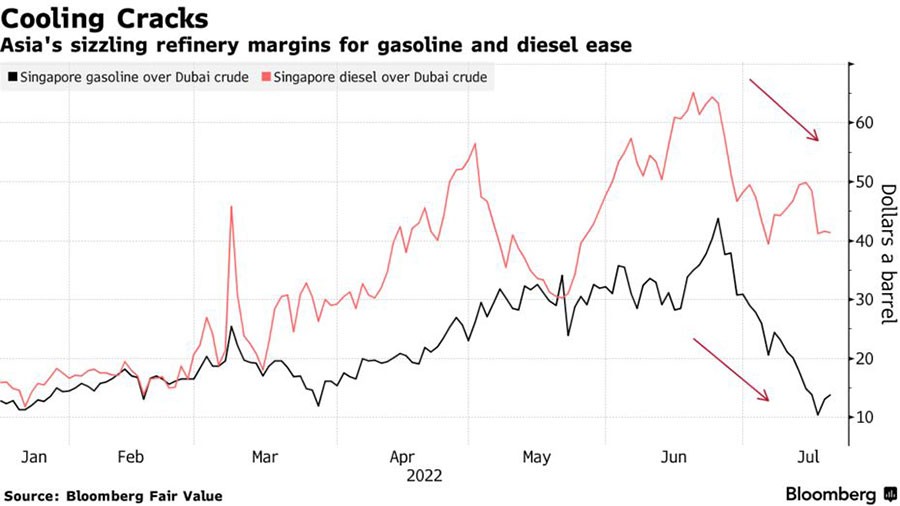 India eliminated a levy on gasoline exports and cut windfall taxes on other fuels less than three weeks after they were imposed, driving a rally in the shares of the nation’s No. 1 fuel exporter Reliance Industries Ltd. and top crude explorer Oil & Natural Gas Corp.

New Delhi reduced the windfall tax on diesel and aviation fuel shipments by 2 rupees (3 cents) a liter, and scrapped a 6-rupee-per-liter levy on gasoline exports, according to a government notification. It also exempted overseas shipments from refineries located in export-focused zones, benefiting Reliance.

The tax on domestically produced crude has been lowered by about 27% to 17,000 rupees a ton. Bloomberg News first reported Thursday that the government was considering lowering the taxes.

Mukesh Ambani’s Reliance jumped as much as 4.4%, the most in two months, in early trading in Mumbai. The heavyweight’s stock lifted the benchmark S&P BSE Sensex higher. ONGC gained as much as 6.8%.

India imposed the taxes on July 1, joining a growing number of nations placing windfall levies to tap energy companies’ booming profits. But international fuel prices have cooled since then, eroding profit margins at both oil producers and refiners.

International crude prices have slumped since mid-June on concerns about a potential global recession, at one point erasing all the gains that followed Russia’s invasion of Ukraine. Returns from processing gasoline and diesel in Asia have plunged in recent weeks, with industry consultant FGE expecting a further decline in margins this quarter due to increased supplies.

Reliance and Rosneft-backed Nayara Energy Ltd., India’s only privately owned refiners, make up 80% to 85% of India’s overall gasoline and diesel exports, according to FGE.