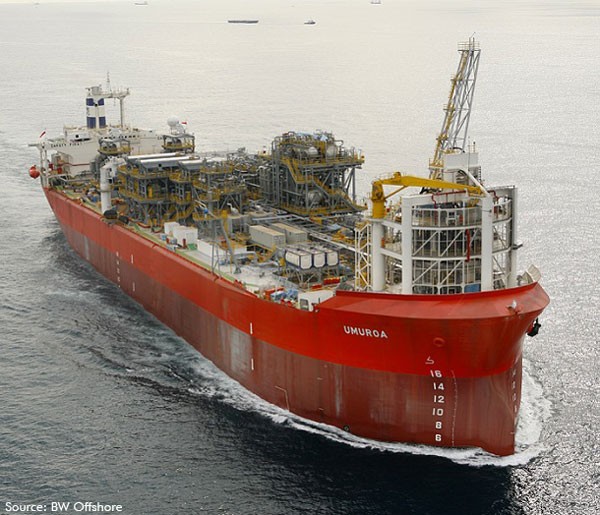 FPSO operator BW Offshore has found uncertainties related to payment of outstanding overdue hire and payment of future hire by Tamarind Resources for the FPSO Umoria following Tamarind’s termination of the contract for the FPSO.

Earlier in October, BW Offshore said it had been notified by the client Tamarind Resources that the contract for the FPSO Umuroa, currently operating on the Tui field offshore New Zealand, would not be extended. The FPSO has been operating on the field since 2007. The effective termination date will be December 31, 2019.

Following the termination of the FPSO contract and recent developments, BW Offshore said on Thursday it had assessed contractual hire which was due but not paid by the client Tamarind Resources for the FPSO Umuroa.

The assessment has identified uncertainties related to payment of outstanding overdue hire and payment of future hire until the termination date December 31, 2019.

The potential total EBITDA exposure for both past and future hire could be up to $23 million by end of 2019.

BW said it would seek to recover all outstanding hire from Tamarind Resources and its parent company under the provisions of the existing contracts.

For the third quarter of 2019, BWO will book a provision related to the overdue charter-hire impacting EBITDA of approximately $10 million.

BW noted that the Umuroa is a versatile turret-moored FPSO, making it an attractive redeployment candidate for field development.

The Tui Area Oil Project constitutes three fields, Tui, Amokura, and Pateke, which started production on July 30, 2007, and produce from four horizontal wells flowing to the FPSO Umuroa. The oil is processed on the Umuroa before being exported via export tankers destined for refineries on Australia’s eastern seaboard. The FPSO has a storage capacity of 700,000 barrels of stabilized crude oil.

The Tui area was previously operated by AWE until Tamarind took over operatorship in March 2017.