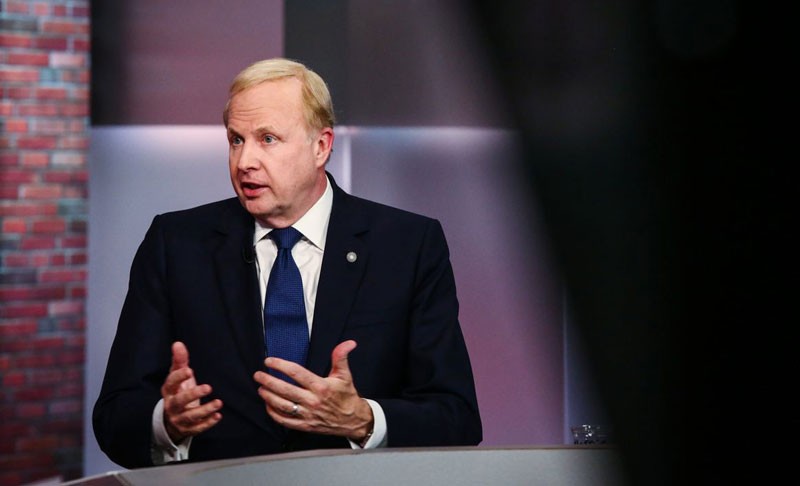 Sanctions on Iran’s crude sales are likely to put more pressure on the oil market than the last time, spurring volatility for the rest of the year, according to BP Plc Chief Executive Officer Bob Dudley.

The way the world’s financial system works mean U.S. sanctions will create roadblocks for Iran’s customers, Dudley said in a Bloomberg television interview. Buyers from India, China and Japan will probably lack access to ships and insurance needed to move Iranian crude, among other difficulties, he said.

The sanctions have taken Iranian supply out of the market even before the sanctions officials kick in Nov. 4. The loss of barrels could cause crude prices to whipsaw, and possibly even briefly rise to $100/bbl, a level not reached in four years, Dudley said.

“I’d like to think that’s not what’s going to happen,” Dudley said. “There’s a lot of uncertainty and volatility in the next month.”

Brent traded near $82/bbl in London on Tuesday, the highest in almost four years on concerns over Iranian supply, and OPEC’s refusal to immediately raise production. “Oil prices feel high to me,” Dudley said.

The Iran sanctions are different this time around, he said. U.S. President Donald Trump’s administration is taking a harder stance than previous restrictions six years ago. It wants all oil imports from Iran to end by November, and it’s unclear if any waivers will be granted. In previous sanctions under Barack Obama, the government had allowed nations to continue purchases at reduced levels.

Crude’s rebound from the depths of the downturn and the associated volatility are posing a new challenge for the world’s biggest oil companies. Though they now have more funds to spend, they will need to prove they can stay disciplined to keep investors happy. During the bruising slump, they cut billions of dollars of investments to demonstrate they can survive at low prices.

“The industry must invest enough to provide the energy but can’t get out of the frameworks and lose the credibility again,” Dudley said. “It’s quite a delicate move forward here with the companies.”

The U.S. trade war is also affecting companies, he said. For example, BP’s cost of steel in America, where it has 40% of its capital employed, will probably go up by $100 million because of increased tariffs. The tussle with China may slow down some liquefied natural gas projects in America.

“Now the impacts are not there, but the market is anticipating things,” he said. “That’s where the volatility comes in, because nobody’s sure right now.”