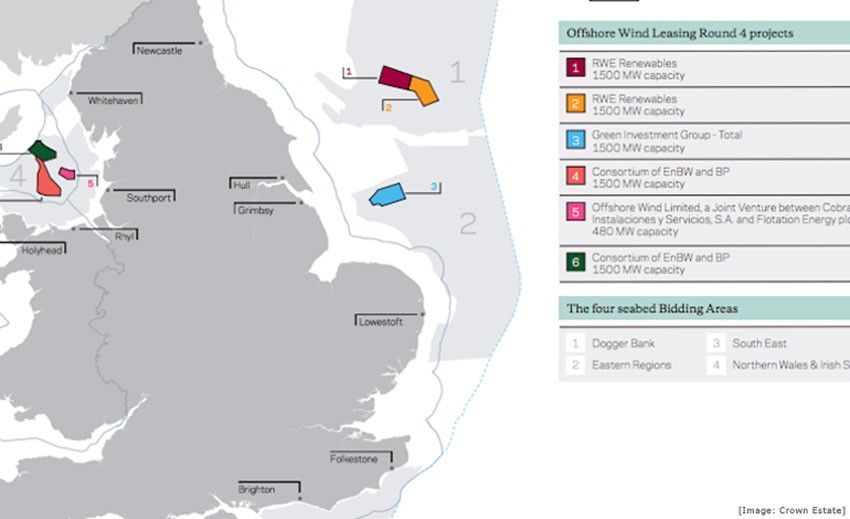 Oil and gas companies have dominated the Crown Estate Round 4 leasing process with massive bids securing options for projects in the Irish and North Seas.

BP is the preferred bidder for two 1.5GW sites in the Irish Sea with option fee bids of £154,000 per megawatt per year. The company has paid a deposit on both sites of £231m and said it expects to make four annual payments of £231m on each lease before projects reach a final investment decision.

The sites, being developed with EnBW, are expected to be operational in seven years, said the oil major.

The two leases are “highly advantaged”, with strong wind resources and proximity to shore that make them attractive investment opportunities. Their near-shore location, around 30 kilometres off the coast of North West England and North Wales, will allow for lower cost, more reliable transmission infrastructure, said BP. Their shallow water depths of 35-40 metres are also expected to support efficient and cost-effective development.

RWE is meanwhile the preferred bidder for two adjacent offshore wind sites with a total potential capacity of 3GW. The awarded sites are in the shallow central area of the North Sea known as Dogger Bank, 110km from the north-east coast of England. The sites are close to RWE’s existing offshore wind development project Sofia.

The average price the company was awarded to lease seabed was £82,552 per MW per year, which was the lowest awarded price during the auction, it said.

Total has secured a 1.5GW site off East Anglia.

The French developer, which is in a joint venture partnership with GIG, was awarded the lease for an annual option fee of £83,000/MW/year, during the development phase.

A joint venture between Cobra Instalaciones y Servicios and Flotation Energy landed the final project, a 480MW site in the Irish Sea with a £93,000/MW/year bid.

BP chief executive Bernard Looney said: “Success in this round marks bp’s entry into one of the world’s best offshore wind markets. This is both important progress towards BP’s transformation into an integrated energy company as well as a significant next step in our long history in the UK.

“These projects – in which we are teaming up with an experienced partner EnBW - are absolutely in line with our determination to invest with discipline into only the very best opportunities. We are fully confident that these highly advantaged resources will deliver - at a minimum - the 8-10% returns we demand of our renewables investments.”

RWE chief offshore officer offshore Sven Utermöhlen said: “The awarded sites on Dogger Bank are a perfect fit to our UK offshore wind portfolio as they are in the proximity of our existing offshore wind development project Sofia, offering future operational synergies.

“As next steps, we intend to start development works and preparation for consenting as soon as possible. We look forward to working with The Crown Estate and all other stakeholders to take our new UK offshore wind development projects forward.”

“Total is delighted to have been awarded 1.5GW as part of the 4th Round of offshore wind leases from The Crown Estate with our partner GIG. We continue to support the energy transition goals of the UK. This project is our largest renewables development in Europe to date and an important step toward our 2050 net zero ambition”, said Julien Pouget, Senior Vice President Renewables at Total.

“This success builds on our historical expertise in the UK offshore and is paving the way to expansion of our renewable energy offering in the country in line with our strategy of becoming a broad-energy company.”

All winning sites will now go through a plan-level Habitats Regulations Assessment before agreement for leases are signed.