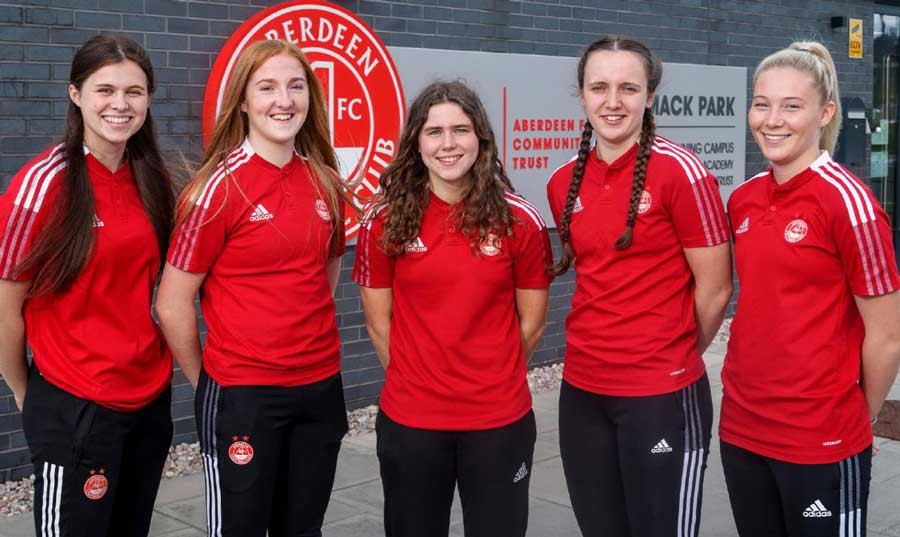 Aberdeen FC has announced that TEXO will be the Club’s new shirt sponsor for the next three seasons, starting from season 2022/23.

Aberdeen FC has this morning announced a significant milestone in the Club’s history as Aberdeen FC Women prepare to become a semi-professional team.

With the SPFL now taking a leading role in the development of women’s top-flight football, and with the women’s game in Scotland on an exciting upward trajectory, there is a strong desire from the Club to build on the progress and success achieved thus far, and to move to the next phase of the strategic plan for AFC Women.

Having enjoyed back-to-back promotions and a successful season in the Park’s Motor Group SWPL 1 in which they consolidated their mid-table position, competing strongly with more established teams in the league, the move to become semi-professional represents a clear and ambitious move by the Club to invest in the progression of its women’s team.

A small group of first-team players, including Jess Broadrick, Bayley Hutchison, Francesca Ogilvie, Eilidh Shore and Eva Thomson, have been secured on contracts until 2024, with further investment being made by the Club to enhance operations off the field, improve standards and infrastructure, whilst ensuring there is a clear pathway to professional football for female footballers across the north-east.

AFC Director of Football, Steven Gunn, is delighted to see the Club’s vision, set in motion three years ago for AFC Women, come to fruition with this enhanced model.

He said: “Ever since we took the decision to bring the women’s team under the Aberdeen FC umbrella in 2019, we have been on an incredible journey winning the SWFL Division 1 – North, SWPL 2 and now consolidating our place in SWPL 1.

“We’ve enjoyed several ‘firsts’ including the first AFC women’s match at Pittodrie recently in front of a fantastic crowd. Now we’re pleased to have rewarded this group of players with the Club’s first ever professional contracts for women football players as we embark on the next part of our journey with women’s football in the region.”

“It’s a big step for us but it’s also a step that’s been taken with a lot of thought behind it and it fits both our long-term football strategy at the Club and our financial model. Interest in and support for AFC Women has grown dramatically, and we think it is right to reward the players with the opportunity to become the first ever professional female players in the Club’s history.

“These players were selected because they are all young, promising players. We feel their performances and in particular, those at international level, merit the chance to go and develop to be the best they possibly can, like we would do for any young player here at Aberdeen Football Club.

“The rest of the players in the squad will have the opportunity to become professional as they progress and develop further. More importantly, we’re going to enhance what we do for them as well, for each individual that’s not on a professional contract. We’ll improve what we do for them going forward to help take us to another level and work our way up the league, but more importantly become a sustainable side in the top-flight.

“It’s ultimately about giving young girls in the north-east and beyond the chance to fulfil their dreams of becoming professional footballers here at Aberdeen FC. These five players will clearly demonstrate what is possible for aspiring female footballers making their first moves within the game.”