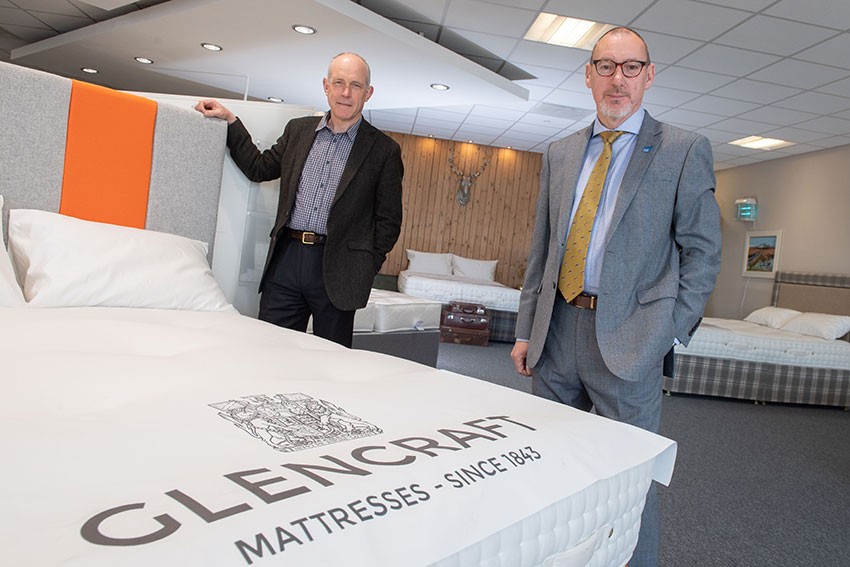 Aberdeen charity Glencraft, the luxury mattress maker that has supported disadvantaged people for 178 years, has won a prestigious Queen’s Award for Enterprise.

Today Glencraft is a recognised global luxury mattress brand – with sales to five-star hotels and multi-year distribution agreements with companies in South Korea and China.  Through its partners, Glencraft has branded stores in Singapore and Hong Kong.

The social enterprise sells more than 5,000 mattresses per year and is currently in talks with a number of potential European partners.

Closer to home, it has provided bespoke mattresses for the offshore oil & gas sector and has an ongoing contract for the supply of 1,100 industry-compliant luxury mattresses for a North Sea operator.

It counts prestigious hotels among the admirers of its products. They include heralded establishments such as The Fife Arms in Braemar, The Balmoral in Edinburgh and Brown’s Hotel in London’s Mayfair district.

The award for promoting opportunity through social mobility is a fitting tribute to Glencraft chairman Duncan Skinner, who sadly passed away earlier this month following a year-long battle with cancer.

It was Duncan’s idea to enter the Queen’s Award for Enterprise. He was told the social enterprise he helped to save 11 years ago had been successful a few days before he passed away.

Mr Skinner, along with businessman Bob Keiller – a former CEO at Wood Group – led the fight to save Glencraft in 2010. The charity, which employs people from disadvantaged backgrounds, has since gone from strength to strength, supporting 38 jobs and attracting worldwide admirers.

Graham McWilliam, managing director at Glencraft, said: “Duncan will always hold a special place in everyone’s hearts at Glencraft. He helped to save a social enterprise by ensuring it travelled down a more professional and sustainable path – a strategy for long-term success.

“Only one member of staff found work when the site was closed for a short time in 2009. Duncan recognised the importance of giving people the opportunity to work, regardless of their background.

“It was Duncan’s idea to enter the awards and typical of him to be thinking of others, even at a time of immense personal challenge. His response, when informed of the award win, was to say simply ‘that’s awesome’. He was a special person, defined by integrity.

“We’re thrilled to win this prestigious award – it’s a lasting tribute, not only to Duncan and all that he did for Glencraft but also to everyone at the charity.

“One member of staff has been with Glencraft for nearly 50 years, while another provides key manufacturing skills despite being blind. He has been with us for 35 years. This honour recognises the role everyone here has played in our success story and our commitment to making a quality product.”

Glencraft also provided mattresses free of charge to the Edinburgh Social Bite Village project. One of Glencraft’s recent highlights was a contract to supply 974 mattresses for the Caledonian Sleeper Service.

The handmade luxury mattresses, some of which have 3,000 pocket springs, have been showcased in Vogue magazine and The Sunday Times. Its high-end mattresses incorporate UK-sourced natural materials such as horsehair, mohair, cashmere, wool and alpaca wool. It holds no stock. All its mattresses are made-to-order by hand.

In addition, Glencraft supplies a Glasgow-based employment support facility RSBi City Building by manufacturing bonnell springs for its mattresses. RSBi employs more than 250 people, more than 50% of whom have a disability.

It’s all a far cry from when Glencraft faced closure in 2009 after Aberdeen City Council pulled a substantial grant due to a funding review. The campaign to save the charity – it relaunched in 2010 – and introduce a more strategic approach secured its future. A total of 30 of its team of 38 come from disadvantaged backgrounds in relation to health or social economic challenges.

Glencraft, which holds a Royal Warrant and has supplied mattresses to four generations of royalty at Balmoral, won the Queen’s Award for Enterprise, Promoting Opportunity (through social mobility) for its commitment to supporting people from under-represented groups, while providing development and training support to its staff and a sustainable business model.

Aberdeen business consultant Jonathan Smith joined the Glencraft board in mid-2019 and was appointed acting chairman in June last year. He is a former senior manager with a global energy company and was named Inspirational Mentor of the Year at the 2019 Elevator Awards.

Jonathan said: “The whole team at Glencraft will be aiming to continue to build on Duncan's remarkable legacy. To win this award is a fantastic achievement.”

Based in the city’s Mastrick area, the not-for-profit social enterprise, which also manufactures divans and headboards, is self-funded apart from a training support grant.

Mr Skinner dedicated himself to supporting several Scottish charities and social enterprises after a successful career in the oil & gas sector.

Now in its 55th year, the Queen’s Awards for Enterprise are regarded by many as the most prestigious business awards in the country, with winning businesses able to use the esteemed Queen’s Awards Emblem for the next five years.