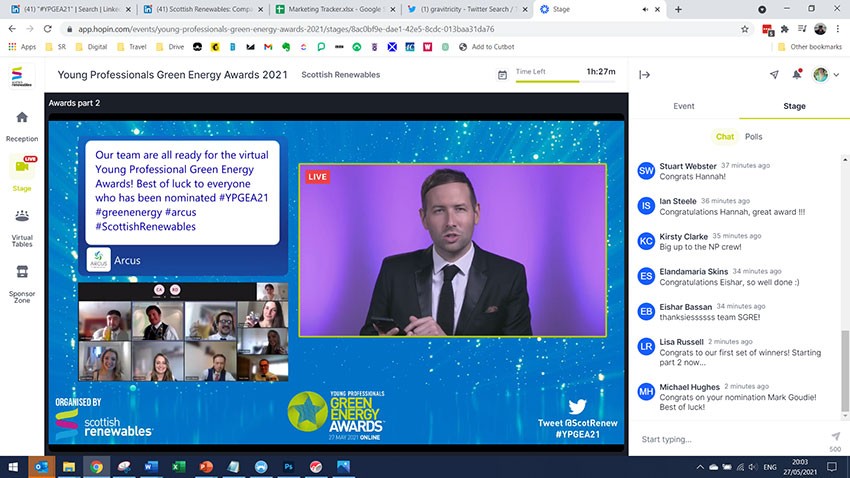 The event, which would normally take place as a black-tie event in Glasgow, was hosted online for a second year with more than 300 guests tuning in to the broadcast-quality live awards show.

Winners include offshore wind farm engineer Eishar Bassan of Siemens Gamesa Renewable Energy, for her role in changing workplace culture for the better. Her work has seen a Diversity and Inclusion Strategy implemented across the company’s worldwide operations.

She joins seven others who were presented with Young Professionals Green Energy Awards for their bright and innovative contributions to Scotland’s renewable energy industry.

Anthony Kinsella of ScottishPower Renewables was announced as the Innovator Award winner for his pioneering work on Virtual Synchronous Machines, which could change the way the electricity system is managed in the future.

Recognition also went to Hannah Grainger of BAM Nuttall, who received the Engineer Award for improving the safety, quality and environmental impact of projects, and for her work addressing the shortfall of female engineers in the renewable energy sector.

The Academic Award went to Fraser Stewart, PhD Student at the University of Strathclyde, for his work informing Glasgow Community Energy – the city’s first ever community energy project, which will benefit some its most deprived communities.

The winners were selected by a panel of eight judges from more than 100 nominees.

“This year’s Young Professionals Green Energy Awards once again showcase the incredible talent pool we have here in Scotland.

“It is truly inspiring to see the drive and dedication of those who are just starting their careers in renewable energy.

“COP26 coming to Glasgow in November will see the world come together to map out what we need to do next to fight climate change and it’s reassuring to know that the innovation and skills of the people taking part tonight will play a key role in delivering those ambitions.

“Congratulations to all the winners, you should be extremely proud of your achievements.”