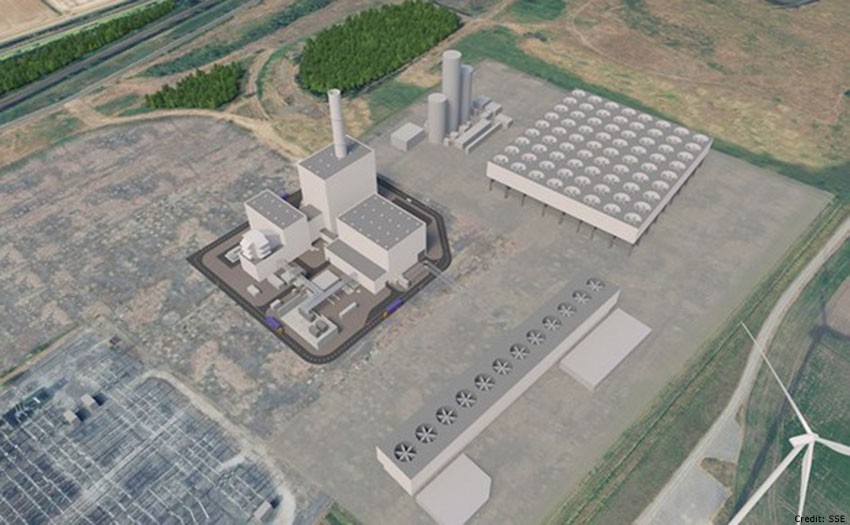 SSE and Equinor have unveiled plans for a 'clean power hub' near Scunthorpe, comprised of a blue hydrogen-fuelled power station alongside a fossil gas power plant equipped with carbon capture technology, with the energy giants aiming to store the resulting CO2 under the North Sea.

The two firms today said they had signed an agreement to jointly develop the two 'first-of-a-kind' power plants in the Humber region, one of which they claim would be the world's first large-scale power station to run purely on blue hydrogen fuel produced using fossil fuel gas.

While the 900MW Keadby 3 gas plant project has been in the works for some time - with a formal consultation about the project wrapped up earlier this year - today marks the first time plans for the Keadby Hydrogen project have been revealed. That hydrogen-powered plant would have enough capacity to generate 900MW of electricity, and would galvanise the UK's nascent hydrogen economy with a peak demand of 1,800MW of the low-carbon fuel, the firms said.

The Keadby Hydrogen plant could come online by the end of the decade, with the Keadby 3 gas project potentially even sooner in 2027, the firms said, although they stressed that final investment decisions would rely on the development of wider hydrogen and CCS infrastructure in the UK.

But SSE and Equinor argued their plans unveiled today could generate flexible, low-carbon energy to millions of homes in the region, accelerating the decarbonisation of the UK's electricity grid, while also helping the government meet its 2030 hydrogen and carbon capture reduction targets.

"These projects would play a major role in decarbonising the UK's flexible generation capacity, while supporting a green economic recovery in the Humber," said Stephen Wheeler, managing director of SSE Thermal. "By utilising cutting-edge carbon capture and hydrogen solutions, we can decarbonise power generation, heavy industry and hard-to-reach sectors of the economy, which will be essential in both achieving net zero emissions and ensuring a just transition for workers and communities."

The news comes a month after the government granted £24m to a scheme backed by Equinor and led by BP that aims to build a pipeline to transport and store emissions generated by fossil-fuel powered industrial sites and future blue hydrogen production facilities in Teesside and Humber to a reservoir under the North Sea.

It is envisaged the two Keadby projects would integrate into this CO2 pipeline and storage network, as well as with low-carbon infrastructure being separately planned across the Humber region by the Zero Carbon Humber partnership, a coalition of companies that includes Equinor and SSE Thermal that also received public funding last month.

Fuel for the Keadby Hydrogen plant would be supplied by H2H Saltend, a blue hydrogen production facility being developed by Equinor at the nearby Saltend Chemicals Park, the firms said. The plant is the anchor project for the Zero Carbon Humber scheme and is expected to come online by mid-2020s.

"They are a further step in Equinor's ambitions for the Humber, following on from our H2H Saltend project that will start producing low-carbon hydrogen at scale by the mid-2020s," she said. "We believe these technologies are vital for heavy industry, flexible power and other hard-to-abate sectors to achieve net zero emissions, while also ensuring a just transition for industrial communities."

The region - the most carbon intensive in the UK - is home to 27 per cent of the UK's oil refinery production as well as sizeable chunk of the chemicals industry. Decarbonising industry in the region is therefore critical to achieving the government's aim of slashing emissions from the UK's heavy industry by two-thirds over the next 15 years.

Business Secretary Kwasi Kwarteng welcomed the plans announced today from the two energy  giant, arguing the two pioneering power plants would generate employment across the Humber region and deliver a sustainable recovery to the ongoing health and economic crisis.

"The Humber region is at the heart of our commitment to tackle climate change and is already on the frontline of developing vital clean technologies which will change the way people's homes and businesses are powered while slashing emissions," he said. "This new partnership will ensure that world-first technology is being developed in Scunthorpe and across the Humber, creating green jobs and bringing new investment which will benefit local communities and businesses - revitalising this industrial heartland as the UK builds back greener."

Under the terms of the partnership agreement announced today, SSE Thermal and Equinor also said they were also exploring options for hydrogen blending at the controversial gas-fired Keadby 2 facility - which is currently being developed by SSE - in a bid to "progressively decarbonise" the power plant.

The two energy firms, which have previously worked together on a number of projects, including the Dogger Bank offshore wind farm and a gas storage project in East Yorkshire, also plan to further collaborate on other as-yet unnamed projects elsewhere in the UK, they said.

It come just a few weeks after BP announced plans to build the UK's "largest" blue hydrogen facility in Teesside, which it envisages producing 1GW of the low carbon fuel by 2030.