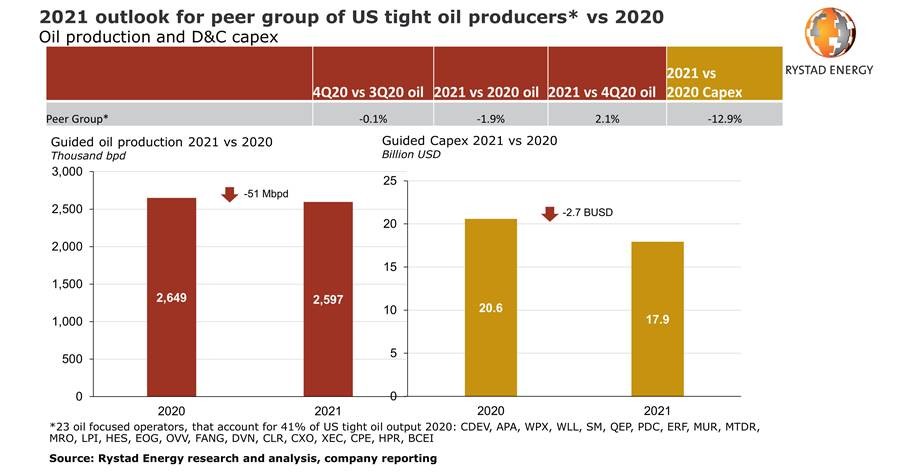 US’ shale oil output is set to decline this year thanks to the ravages of COVID-19, and as a result, 2020 average production is expected to fall by 3.1% year over year, or 7.5 million barrels per day (bpd) from 2019’s 7.7 million bpd, Rystad Energy estimates. The full-year trend will not change in 2021, when shale oil output is estimated to decline further by 2-3% year over year. However, most of this decline has already occurred throughout 2020 and no further impact is anticipated in a $40 to $45 WTI environment.

US operators’ D&C capex, which enjoyed strong levels in 2019 at $98.7 billion, will more than halve in 2020, Rystad Energy projects, and decline to just $45.2 billion. Operators’ have now shifted focus towards preserving as much output as possible while implementing capital efficiency measures, which means 2021’s capex is projected to decline by a wider margin compared to output, a drop we believe will be between 7-9% year over year.

Rystad Energy has also analyzed the third quarter guidance of a peer group of oil-focused public operators comprised of 23 companies, which together account for about 41% of this year’s US shale oil production. Interpreting the group’s released guidance, its 2021 onshore oil production will likely shrink slightly by 1.9% while D&C capex will be considerably lower at 12.9% compared to the group’s stated 2020 plans. When the plans of larger producers and private operators are added to the analysis, capex decline will likely be slower, at 7-9%, and the output cuts larger.

“Amid a second wave of Covid-19 in North America and Europe, and uncertainty related to potential new regulation the industry may face once a new US administration settles in, operators largely remain disciplined. They aim to increase cost efficiencies and spend only the minimum amount needed to prevent next year’s output from declining too much,” says Alisa Lukash, Senior Analyst at Rystad Energy.

Despite the fact that operators in the Permian Basin are leading capex reduction efforts, the group has guided an almost 2% increase in oil output in 2021 compared to 2020. The factors driving this drastic cost reduction per barrel include service cost reductions and the price deflation of completion components.

Besides the above mentioned cyclical factors, other drivers behind increased output include the continuous high grading of operations, maturity in base decline rates, and a large accumulation of drilled but uncompleted (DUC) wells, which are likely to be put on production in the first half of next year.