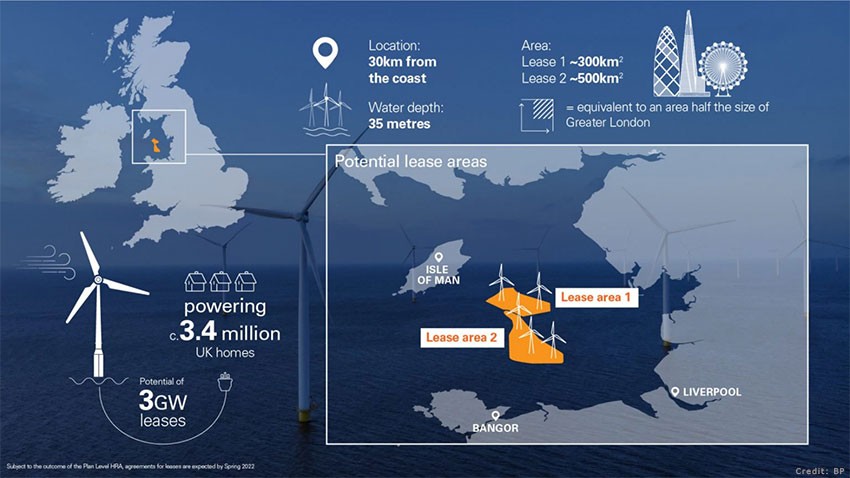 With six projects, the venture will represent nearly eight gigawatts (GW) and could provide enough power to fuel around 7m homes.

Chief executive of The Crown Estate Dan Labbad said: “With a net zero goal, some of the best offshore wind resources in the world, and clear commitment from government and industry to continue investing in the low carbon economy, the UK stands ready to play its part in addressing the global climate crisis.”

As the world’s largest offshore wind market, Britain has plans to utilise the technology to generate a third of its electricity by 2030 which forms part of the UK’s efforts to reach its 2050 net zero carbon emissions target.

The sites, priced on average at £82,552 per megawatt annually, are 110km from the North East coast of England.

Oil major BP won two sites in the Irish Sea representing a total of 3 gigawatts in a joint venture with Germany’s EnBW.

Having entered the US wind market last year, it is the oil firm’s first move into Britain’s offshore wind market.

The JV will pay £231m for both leases every year until 2025, before a final investment decision is taken.

It is hoped that the sites, which provide about a third of the 10 extra gigawatts the UK needs to hit its 40 gigwatts target by 2030, will be operational in the next seven years.

The move is part of a broader plan from BP to move away from its oil and gas dependence over the coming years.

The new leases take its total wind power capacity to 3.3 gigawatts, the second largest of any oil major. It is targeting total renewables capacity of 25 gigawatts by the end of the decade.

Last week the firm reported a $5.7bn loss, its first in a decade, as the pandemic took its toll on the oil industry causing demands to plummet with blanket travel restrictions.

The deal marks a shift towards greener markets, matching the prime minister’s pledge in October last year to a “green industrial revolution” that plans to create 2,000 jobs in construction and support 60,000 more.

Offshore windfarms could help the UK cut down 12.5m tonnes of CO2 emissions each year – emissions worth 19 per cent of the country’s annual household emissions.

The projects can boost the UK’s 39 GW of wind power by 21 per cent, a major contribution to the government’s target of 40GW by 2030.