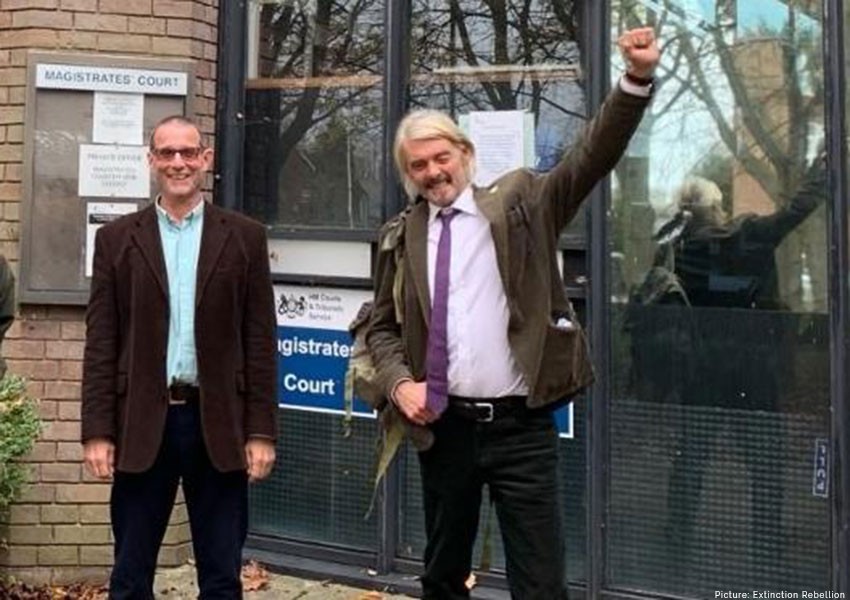 An Uckfield father convicted in court after climbing on an oil rig in an Extinction Rebellion protest has vowed to fight on.

Alistair Sandell, a horticulturalist, of Uckfield, appeared before Staines Magistrates Court on Monday (November 16), and pleaded guilty to aggravated trespass.

He was fined £360, Extinction Rebellion confirmed.

Speaking after court, the 56-year-old said: “As a father I felt strongly compelled to scale and occupy the UK Oil And Gas drilling rig.

“My family is super proud and now I can press on with the campaign putting a stop to oil extraction on our doorstep.”

Mr Sandell was arrested on October 10, at the Horse Hill oil extraction site near Horley where he had scaled a 32-metre high oil rig to stage a 12-hour protest against plans by UK Oil and Gas (UKOG) to extract fossil fuels at the site.

He was joined on the rig by Lindsay Parkin, 50, a management consultant of Brighton, who was also arrested and charged with the same offence.

Mr Parkin pleaded not guilty and is due to attend a pretrial hearing at Staines Magistrates Court, Extinction Rebellion said.

The pair’s protest was the latest in a series of actions at the site over the last 12 months including slow walks, activists ‘locking on’ across the site gates and occupying containers within the site.

Extinction Rebellion said the protests aim to highlight the continued oil extraction at the Horse Hill site despite the declaration of a climate emergency by Surrey County Council in July 2019.

Mr Sandell said: “Surrey County Council let us down. After declaring a climate emergency why would they permit a further 20 years of unconventional oil extraction within our beautiful weald?

“We need to protect the intricate network of streams and rivers from damaging contamination.

“Our children will depend on a clean water supply.

He continued: “It was super reassuring having so much local support both during my action and throughout the legal process.

“I am very aware that I am in a privileged position and self-reliant enough to continue my life without experiencing the detrimental effect of a criminal record.

“I actively support regenerative culture which enables our communities to resist and recover from this kind of direct action.”

Mr Sandell’s court case came just before the launch of the High Court judicial review of Surrey County Council’s decision to grant planning permission to produce oil at the site for 20 years.

An Extinction Rebellion spokesman said: “These two fathers took this action in the name of their children and in the name of all children, who will suffer the impact of the terrible damage this continued fossil fuel extraction will wreak on their futures and on their planet in terms of climate and ecological destruction.

“We are already seeing this impact and we are calling on the Government and Surrey County Council to play their part and stop fossil fuel extraction now.”