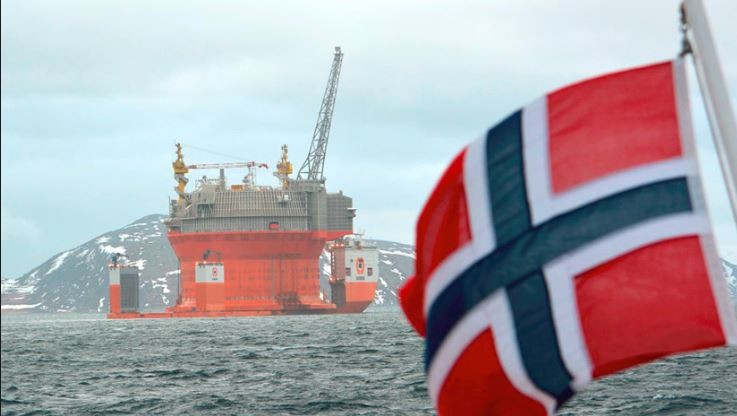 The strike by Norwegian offshore oil and gas workers has accelerated when hundreds more walked out in a dispute on Monday over pay and pensions after employers failed to respond to union demands for a new offer.

The strike, which began last Tuesday, has had a limited impact on Norway’s oil production so far, but some drillers warned of possible contract cancellations if the dispute goes on for a month or more.

A further 900 workers went on strike on Monday, joining almost 700 who walked out last week, and the Safe union said it would consider in the next few days whether to widen the strike to all of its 2,250 members.

Safe went ahead with its plan to expand the strike after employers did not respond to its demands for higher wages and pension benefits by a midnight (2200 GMT) Sunday deadline.

The expanded strike was not expected to have any immediate extra impact on oil or gas production beyond the closure last week of Shell’s Knarr field, which produces 23,900 barrels of oil equivalent per day.

Norway’s biggest oil producer Equinor said it did not expect its output to be affected “in the short term” due to the escalation of the strike.

“More drilling and well operations are affected. We will get delays ... In the short term we do not see any production or milestone consequences,” said Equinor spokesman Eskil Eriksen.

He declined to comment on what the company considered “short term” and what the long-term consequences would be.

It is the biggest strike in Norway’s oil sector since 2012, but has involved a relatively small number of workers. Norway’s oil industry directly employed 50,700 workers in 2017, around half of whom worked in production, according to Statistics Norway.

There has been no contact between employers and the union since the strike began last Tuesday after Safe rejected a proposed wage and pension deal.

Employers, represented by the Norwegian Shipowners’ Association, said on Monday that the union “lacked understanding of the economic reality of the Norwegian continental shelf”.

“It is ... utterly incomprehensible that Safe is willing to put at risk jobs, the shelf’s attractiveness and competitiveness, and Norway’s reputation as a safe and stable supplier of oil and gas resources,” lead negotiator Jacob Korsgaard said in a statement.

Korsgaard told Reuters he did not plan further talks with the union this week, after saying on Saturday that a dispute like this could not go on indefinitely and that employers were considering counter measures.

Reidun Ravndal, a member of Safe’s strike committee, said that while 900 additional workers were joining the strike on Monday, it would take some time for the strike to become fully effective because they have to follow safe shutdown procedures.

One of the drilling companies affected, Odfjell Drilling , warned of financial losses and of contract cancellations if the strike lasts “a long time”.

“There will be a financial loss, yes. We have mechanisms in the contracts to compensate, but if it lasts a long time consequences will be serious,” CEO Simen Lieungh told Reuters, without specifying a time span.

“Contracts could be terminated,” he said, mentioning contracts with Equinor and Aker BP.

Contract terminations is a concern for other drillers too, according to lead negotiator Jacob Korsgaard.

“It is a real concern that increases every day,” he told Reuters. Asked whether the strike could lead to contract cancellations if it were to last more than a month, he said: “Definitely.”

Last week Aker BP said a prolonged strike could postpone output from some of the wells it was planning to drill at its Valhall field, which it expected to put in production later in the year.

The employees joining the action work on exploration and production drilling rigs owned by Saipem, Transocean , Songa Offshore, Odfjell Drilling, Archer and COSL, among others.

Asked whether the strike might be widened to the remaining drilling workers that belong to the union, Ravndal of the Safe union told Reuters: “We will have this discussion in the next few days.”