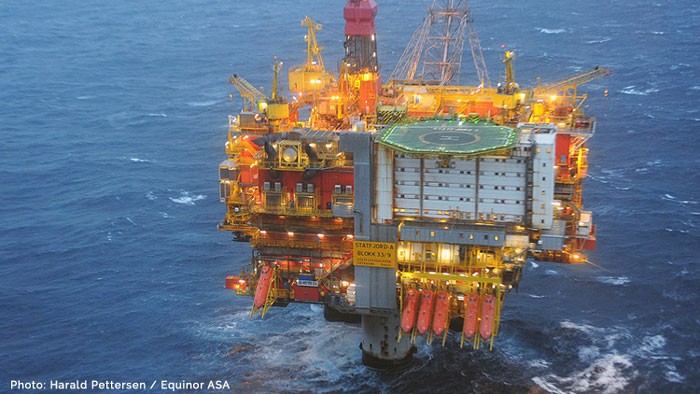 Statfjord A home to Stord

The Statfjord A platform in the North Sea will shut down production in 2022, 43 years after first oil. This more than doubles the expected lifetime of the platform. Now the contract for removal and disposal of the topside has been signed, and the topside will be demolished at Stord – where it was built in the 1970s.

The contract for the engineering work, preparations, removal and disposal of the topside has been awarded to Excalibur Marine Contractors, a company in the Allseas group. Kværner AS at Stord has been hired by Excalibur to dismantle and recycle the topside onshore.

The 48 000-tonne topside structure will be removed from the concrete legs in one single lift by the Allseas vessel the Pioneering Spirit:

“The vessel has done an excellent job installing three of the four Johan Sverdrup topside structures. Now they get to show their strength at the other end of an oil field’s life cycle,” says Peggy Krantz-Underland, Equinor’s chief procurement officer.

The vessel has never performed a lift this heavy. It currently has a lifting capacity of 48 000 tonnes, equal to the weight of the Statfjord A topside structure. The capacity will be increased prior to the lifting operation.

One of the oldest platforms on the Norwegian continental shelf, Statfjord A was originally scheduled to be shut down in 1999. It has since then undergone substantial upgrading and the platform life has been extended several times.

Since first oil on 24 November 1979 the Statfjord field has produced more than five billion barrels of oil and gas, generating more than NOK 1 500 billion in revenues.

“Statfjord A has meant so much to many people. The platform has generated enormous values, many jobs and a proud history. Shutting down production and removing the installation is part of a platform’s life cycle, and we will make sure that this is done in a safe manner, while taking care of personnel and capabilities in a late life phase,” says Hege Flatheim, vice president for Statfjord operations.

All environmental aspects of the decommissioning will be handled in accordance with the highest industry standard and with a recycling grade as high as possible.

The two other platforms on the field, Statfjord B from 1982 and Statfjord C from 1985, will remain on stream until 2025, at least.

The impact assessment for the Statfjord A removal was issued for public consultation in the autumn of 2018, and preparations for shutdown and decommissioning have long been underway. The next step now is to submit the disposal part of the decommissioning plan to the authorities.

“It will describe the proposed disposal solution and timing of the final shutdown of production for Statfjord A.  We also plan to start permanent plugging of wells on Statfjord A this year using the platform’s drilling facilities,” says Thomas Bjørn Thommesen, Equinor’s project director for decommissioning projects.