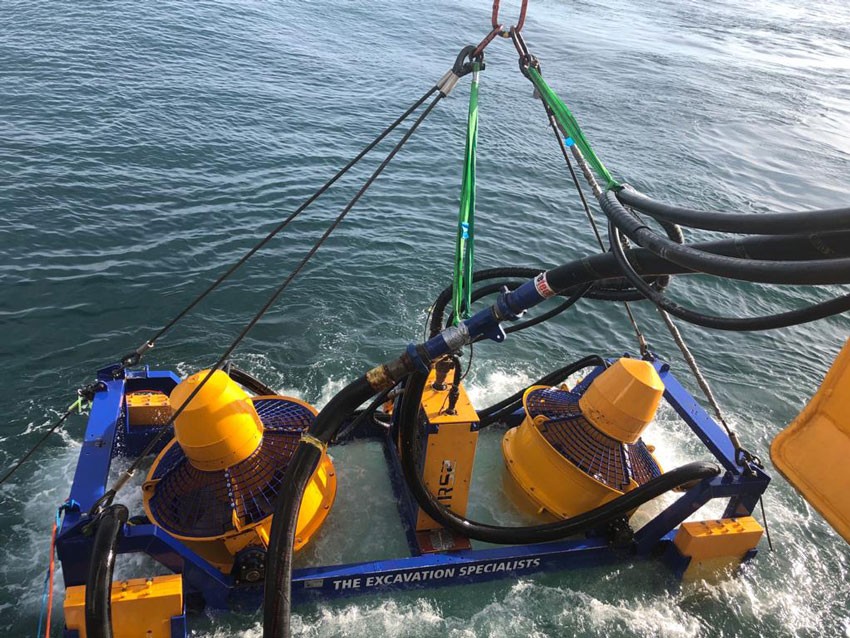 Rotech Subsea returned to Taiwan waters in Q2/3, 2021 for a Tier 1 offshore energy construction giant - and long term European client - for Phase 2 post-lay trenching works at the state OWF. Phase 1 works at the site had been successfully completed in Q2/3, 2020.

The scope of work consisted of burying the remaining 10 cables on site to 2m TOC, meaning a total of 21 cables (4 export and 17 array) had been buried to client specification. Rotech Subsea’s state-of-the-art TRS1 and TRS2 tools CFE tools were mobilised on a support vessel using its 400t crane. Operating in water depths of between 20-30m, soil conditions experienced ranged from soft sand to slightly stiff clay.

The 10 array cables were buried to client specification with ease with Rotech Subsea’s TRS1 excelling, lowering the cables to client spec in one pass at 2m/min. A second pass - requested by the client as a flushing pass - was carried out at 4m/min. The TRS2 lowered the cable with three passes at an average rate of 3m/min.

“Rotech Subsea were delighted to have delivered a highly successful project in Taiwan in what was the client’s first offshore wind project outside Europe,” said Director of Subsea, Stephen Cochrane.

“Indeed, so successful was Phase 1 of the project that the client requested to keep the TRS1 tool on stand-by in-country to ensure its availability, while requesting another TRS1 for an additional campaign.

“This and other successfully completed scopes of work in the Asia-Pacific region firmly establishes Rotech Subsea’s CFE suite of tools as the method of choice for cable trenching in the region. Our experience and performance in these scopes mean we are now seeing more and more that our Suspended Jet Trenchers are being chosen as a primary method for trenching, over other contact trenching systems and ploughs. Because of the enhanced capabilities of the RS tools they can provide deeper and narrower trenches than ever before, with trenching speeds more than double that of competing Mass Flow Excavation tools.”

The scope of work consisted of burying the initial tranche of a total of 21 cables - four export and 17 array - to client specification of 2.1m DoL. The project was completed in two stages. The TRS1 tool was selected by the client due to its unparalleled technical and performance capabilities resulting in increased productivity and a reduction in total project costs.

The subsea spread of equipment was mobilised for the two-stage scope of work on cable laying and support vessels, deployed using the ships’ cranes to water depths ranging from 8-29m LAT. Stage one of the project was a success with the export and array cables buried with ease. Soil conditions were soft sands, however, large sections of stiff clay with strengths up to 80kPa were experienced. Despite this, the TRS1 excelled and lowered the cable with two passes at an average rate of 4m/min reaching speeds up to 10m/min in some sections.