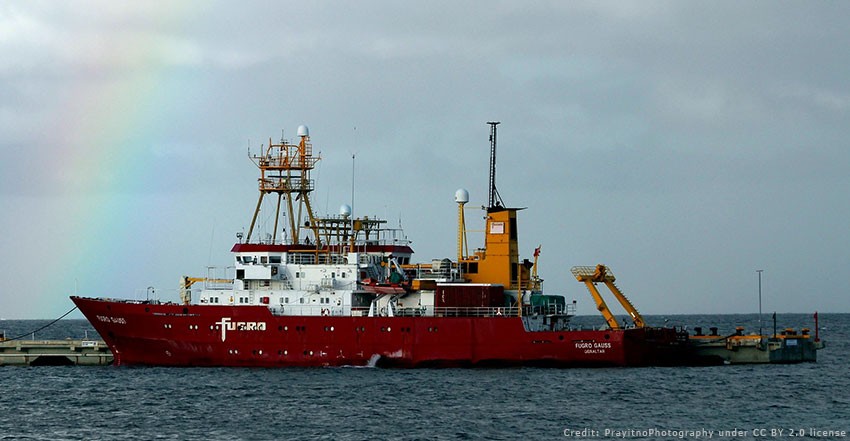 Q&A: From oil and gas to exploring renewables, with Fugro

Fugro has built a name in the oil and gas industry gathering geological data for platform operators. As with other companies in the sector, it has since followed the prevailing winds into offshore renewables. The company has experience gathering geodata as required for floating and fixed wind turbines. However, the renewables industry presents problems to those looking to bring in their offshore experience.

Mathew Farmer (MF): Why do you think Fugro is well placed to transition toward offshore renewables?

Alastair McKie (AM): Fugro has decades of experience working within the marine sector, traditionally within an oil and gas, and infrastructure background. A lot of the lessons learned can be transferred through into the renewables industry. The energy transition is not about reinventing the wheel and starting again.

One obvious example is floating wind turbines, which we talk about quite often now. We spent 20, 30, 40 years moving drilling rigs around. Effectively, these floating turbines now are just many rigs. They have a section above the water, a section below the water, and they’re moored in some way to the seabed.

One of the other big examples is with the cables industry. All of these floating turbines, or fixed turbines, or even tidal generators, are connected, via cables, to the grid. We’ve spent years assisting with cable-laying in the marine environment. We have learned a lot, and have dedicated assets to enable that to happen. A lot of people are now looking at making these assets capable of renewables work.

MF: How difficult has transferring assets towards renewables proved so far?

AM: When we talk about assets, and I guess we mean, vessels, tools, sensors, and methodologies. That transfer has had quite significant speed, and has been fuelled by the demand for capacity.

But if we talk about people, and how we’ve managed to transfer marine workers from being oil and gas specific into renewables, there are challenges for sure with that. But I think the industry has managed to gain from the fact that there is a significant workforce that’s experienced and competent in what they already do in the marine environment that can transfer across.

I fundamentally believe that much of the innovation in renewables in Europe comes down to the expertise within the subsea oil and gas industry in the region. There are some competency and training distinctions to be made between the two, which are still being worked out, but overall, it’s quite a clear transition from my perspective.

MF: How much of an obstacle do training standards present when moving toward renewables?

AM: Obviously, there are some skill set changes. The nature of the jobs in renewables, particularly in the maintenance and operations of wind farms, have some changes.

The biggest challenge to me is perhaps more on a training and legislation perspective. Currently, the training standards are not quite the same, so staff have to do lots of different training courses. Let’s say you’re a technician, and you’re used to working in the oil and gas industry. You want to move into renewables, but the biggest hurdle is the amount of training that’s then required. Actually, the training is more than 80%, similar, but you still need to jump through the renewables hoops.

MF: So do you believe the problem lies in certification more than training?

AM: Exactly. There are lots of opportunities for hands-on training and for certification training. It’s not a case of availability to do the training, I think it’s more down to cost and flexibility. The offshore workforce is very used to training.

We typically retrain and recertify our teams on an ongoing basis, that’s not new. But it’s now another set of things that they want to keep up. The challenge is, if you want to go between oil and gas and renewables in the future, that means you have to have both sets of certificates and tickets. That can be quite financially restrictive for some people.

MF: Is this a problem that regulatory bodies need to address?

AM: For sure. I’m very pleased to say it’s something that the regulatory bodies are looking into. I think it’s been recognized, certainly this year, that it’s a requirement to ensure there’s a sustainable workforce going forward. We need to make that transition easier for everybody involved.

I think the biggest challenge is to try and ensure that we retain consistency through that effort. The oil and gas industry has benefited from national and international regulation. At the moment, I think the renewables industry still has a little bit to catch up on.

MF: So far, has transition required significant internal change at Fugro, or has it been relatively easy?

AM: In short, a little bit of both. We shouldn’t underestimate the amount of effort it takes to enforce a change. I started working with Fugro around 13 years ago, and if I was asked then what it was, I would probably have said it’s a survey company, among other things. We are now considered one of the world’s leading geo-data specialists.

Having that at the core of what we do has enabled change at the pace that we have seen. We have a diverse asset base that allows us to capture the upturn in both industries. One of the biggest challenges, I would say, is the human element of that change. We aren’t turning our back on the oil and gas industry, it’s a case of transitioning towards the future where there is a sensible energy mix.

MF: Can you foresee a time when Fugro works predominantly within renewables?

AM: The world will still need oil and gas, I think we will have an involvement there. But as we transition away from energy provision where oil and gas remain dominant, toward cleaner energy sources, I think we’ll play a pivotal part.

The UK Government has outlined its plans to expand the offshore renewables industry. For sure, it’s possible, if the industry works together. Absolutely I think they are realistic, on the basis that if you asked somebody ten years ago if our position now is realistic, people would probably have said no. But actually, look at what’s been achieved.

MF: What do you think the most exciting part of the upcoming transition will be?

AM: I think the big change for me is the fact that the renewables industry has a totally different risk profile to the oil and gas one. That allows renewables companies to approach the energy transition in a different way, and drive through innovation quicker.

If I look to the way that we are approaching the future, we want to be remote and autonomous. We want to be operating uncrewed vessels. We don’t want to be sending large vessels with lots of people offshore to do a job that we can do with a small, remote, autonomous vessel. As we roll out that technology, I think it’s fair to say the renewables industry takes note fairly quickly, whereas the oil and gas industry, for good reason, is a little bit more considered in their approach.