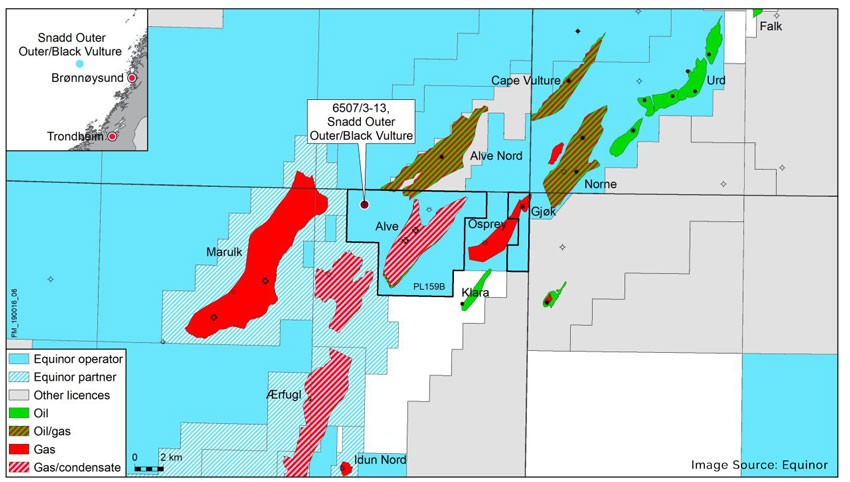 One well – two discoveries in the Norwegian Sea

Equinor and its partners Ineos E&P and Faroe Petroleum have made an oil and gas discovery in exploration well Snadd Outer Outer/Black Vulture in production licence 159B in the Norwegian Sea. The well had two different reservoir targets; an upper drilling target containing 2-12 million barrels of oil equivalent (boe) of gas and a lower target with an estimated volume of 1-48 million barrels of recoverable oil equivalent.

“We are very pleased with the results of both targets. This was of course what we hoped for, and it isn’t given that we find both oil and gas in the same well. The volumes are broadly estimated, and operational challenges prevented side-tracking. We are evaluating both the time and place for further delineation to give us more accurate volume estimates,” says Nick Ashton,  Equinor’s senior vice president for exploration in Norway and the UK.

Drilling of well number 6507/3-13 Snadd Outer Outer/Black Vulture started on 27 April around 14 kilometres south-west of the Norne field in the northern part of the Norwegian Sea.

The operation started by drilling to a good 2800 metres to the first target Snadd Outer Outer, where gas was proven. Further drilling down to 3200 metres to the second target, Black Vulture, hit oil. The well volume totals 3-60 million boe before further delineation is made.

“The deepest target is following up the Cape Vulture discovery of 2017, offering further opportunities on the Nordland Ridge, and we are very happy about today’s discovery. Snadd Outer Outer/Black Vulture and Cape Vulture combined have in fact proven to be a success story for cretaceous reservoirs off the coast of Nordland, encouraging us to pursue further opportunities in the area going forward,” says Ashton.

Today’s announcement succeeds a string of discoveries in the Norwegian Sea during the past years. Since 2017, Equinor has been operator or partner in 11 discoveries in eight wells in these waters.

“The Norwegian Sea has created considerable value and many jobs since Norne was found in 1992. In these waters Equinor operates around 800,000 boe every day, constituting about a fifth of Norway’s daily production of oil, gas and condensate. We will increase our exploration activity in the Norwegian Sea in the time ahead. This was reflected in the previous licencing round for Awards in Predefined Areas (APA), in which we were awarded 16 production licences in the Norwegian Sea,” says Ashton.

The Transocean Spitsbergen rig drilled the Snadd Outer Outer/Black Vulture well. The operation has been completed without any damages or incidents. The well has now been plugged and abandoned, while the licence partners will evaluate how to further develop the discovery.

“Tying the discovery to the Norne ship is one of the options we will study. Snadd Outer Outer/Black Vulture is located close to the Norne field with all its infrastructure, and this option is in line with Equinor’s strategy of using existing solutions. The Cape Vulture discovery has already more than doubled remaining oil resources that can be produced through the Norne field, and we have a specific goal of further increasing the reserves around the Norne field,” says Ashton.

Transocean Spitsbergen is currently moving to production licence 502 to drill the Equinor-operated exploration well Klaff in the North Sea.