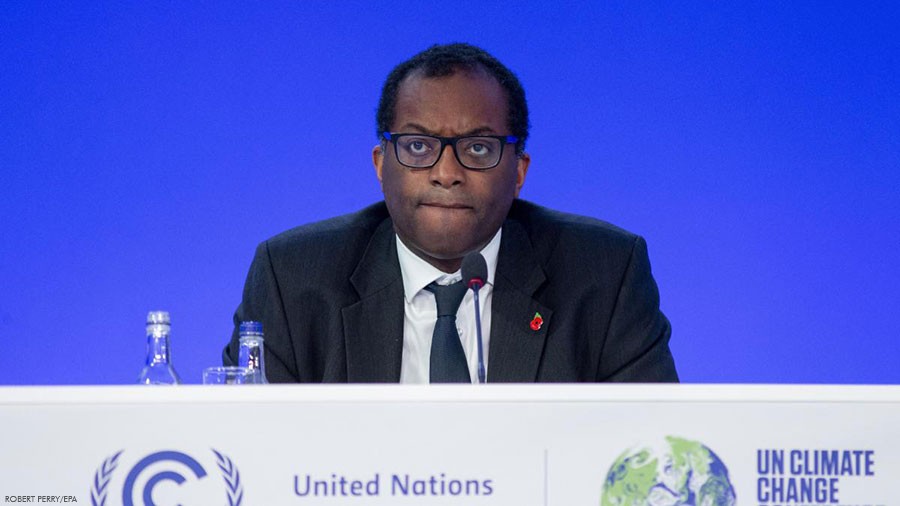 The energy secretary met oil industry bosses for a private dinner days after the Cop26 climate summit to encourage them to keep drilling in the North Sea.

Kwasi Kwarteng dined with executives from companies including Shell and BP in a charm offensive designed to reassure them of government support for UK oil and gas projects, despite public pledges to move away from fossil fuels, The Times can reveal.

The news highlights the competing pressures that the government faces as it seeks to bolster its green credentials and act on climate change, while also ensuring that Britain’s energy needs are met as the gas crisis stokes fears over security of supply.

The dinner with Kwarteng and Tim Eggar, chairman of the Oil and Gas Authority, the regulator, took place in London on November 16, three days after the signing of the Glasgow climate pact that aims to keep in reach the goal of limiting global warming to 1.5C. The International Energy Agency has said that to achieve this goal no new oil and gasfields should be developed.

The government has said that it will keep awarding licences despite the IEA’s advice, subject to “climate compatibility” checks. However, the industry is increasingly nervous about investing, amid rising opposition from Labour and the Scottish National Party and with government support seen as lukewarm.

As gas prices soared in the autumn, Kwarteng repeatedly said the crisis showed that Britain needed to end its reliance on fossil fuels. “Don’t believe anyone who tells you the answer to a global gas crisis is simply drilling for more fossil fuels,” he wrote. Oil groups were barred from formal roles at Cop26, with Shell complaining that it was “not welcome”.

A source said that the dinner had been designed to calm the nerves of oil executives after the summit and to give them “political confidence”, including reassuring them of support for future licensing before last month’s consultation on climate checks. Guests included Gordon Birrell, executive vice-president of production at BP, Zoe Yujnovich, upstream director at Shell, Al Cook, executive vice-president at Equinor, Sam Laidlaw, chairman of Neptune Energy, and Amjad Bseisu, chief executive of EnQuest.

“Any international investor that has options where to put their money isn’t going to consider the UK very attractive right now,” one source familiar with the talks said.

Executives are said to have told Kwarteng that they needed stronger political backing to continue to invest. He has stepped up public support, tweeting last month that “there will continue to be an ongoing need for oil + gas over the coming decades”. He added: “We’re backing the oil + gas sector to decarbonise in a way that protects jobs + energy security.”

John Sauven, executive director of Greenpeace, said: “This schmoozefest looks suspiciously like a desperate attempt by the UK government to reassure the fossil fuel industry that it’s business as usual in the North Sea even after the commitments made at the Glasgow climate summit. The fact that the Cambo oilfield project tanked just weeks after this dinner suggests not even oil bosses believe that.” He urged the government to manage a “just transition”, instead of “cosying up to oil and gas companies”.

A government source said: “It’s right that the energy secretary engages with energy companies during a global gas crisis. Without a domestic source of oil and gas, the UK would be even more dependent on foreign imports and exposed to rocketing global gas prices.” The government would “continue to back our oil and gas sector”, they said.