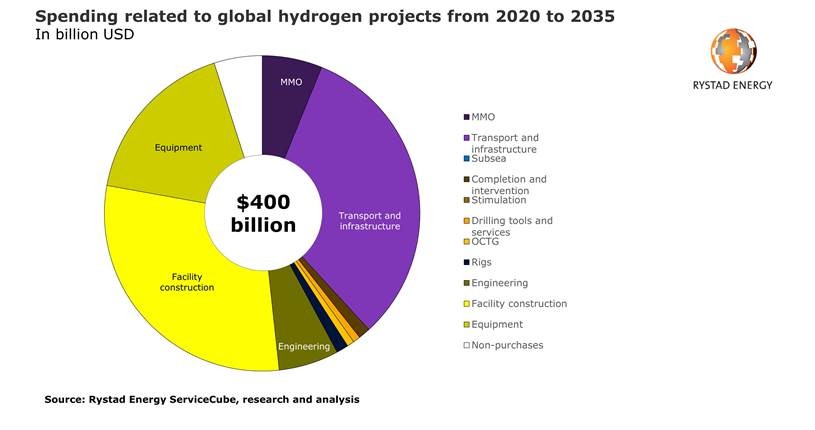 A wave of green and blue hydrogen projects that are poised to be developed in coming years could unlock about $400 billion worth of spending for the service industry between 2020 and 2035, a Rystad Energy industry analysis reveals. The figure excludes separate carbon capture and storage (CCS) development contracts, which could reach almost $35 billion for Europe alone.

Of the total pipeline, Rystad Energy has recently projected that about 30 gigawatts (GW) of green hydrogen capacity is expected to be operational by 2035. Blue hydrogen initiatives are also growing in popularity, with several mega-projects being discussed at present. For all of these planned projects to be realized, substantial investments would need to be made over the next few years.

For the projected development that Rystad Energy expects through 2035, as much as $400 billion worth of investments would need to be deployed into the hydrogen market globally. Transport and infrastructure will take the largest share of the spending pie, as this market segment is forecast to reach an attractive total of $130 billion.

Facility construction costs are next on the list, with suppliers targeting an estimated $120 billion. Equipment costs will reach some $70 billion, while engineering costs and maintenance, modifications & operations (MMO) will amount to about $25 billion each. All other categories of costs are calculated at below $10 billion per segment.

“At present, hydrogen projects, especially green hydrogen, are centered in Australia and Europe. In Asia, meanwhile, Japan and Korea are looking into importing hydrogen and developing international supply chains around the gas, especially within transportation. Hydrogen is also expected to feature in China’s forthcoming five-year energy plan, as well as in the plans presented by provincial authorities in the country,” says Audun Martinsen, Head of Energy Service Research at Rystad Energy.

In Europe, a group of 11 gas infrastructure companies has come up with a proposal for the development of EU hydrogen infrastructure starting with key renewable energy regions in Europe, such as the North Sea. Under the proposed infrastructure strategy, a 6,800-kilometer pipeline network will need to be built by 2030 to facilitate transportation.

Around 75% of this network will come from existing gas pipelines, which will be converted to carry hydrogen instead. Nevertheless, we estimate that around 800,000 tonnes of new large-diameter linepipe will still need to be installed to connect and extend the existing system by 2030.

When it comes to hydrogen storage, large scale storage locations – salt caverns, aquifers or depleted hydrocarbon fields – will be needed, involving either locations already in use for other purposes or developing new ones. Storing and retrieving hydrogen in this manner will require the drilling of a large number of wells – both injectors and producers – thereby creating opportunities for drillers and well service companies to join in on the great hydrogen wave.

Internal investigation of oil seepage to the ground at Mongstad