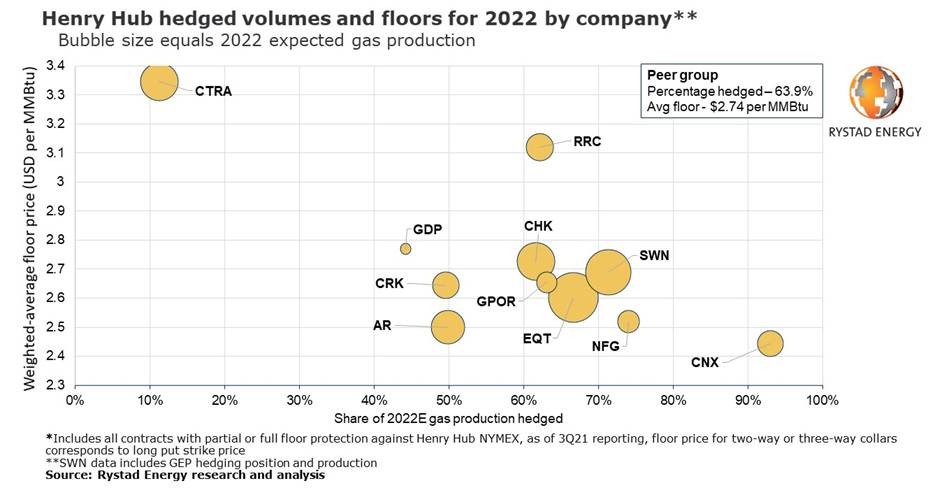 Having hedged most of their output, US gas producers face billions in hedging losses next year

US gas producers are set to book billions of dollars in hedging losses next year because they hedged most of their 2022 production before the recent energy crunch caused gas prices to soar, a Rystad Energy analysis reveals.

The analysis zooms in on a peer group of shale-gas-focused producers that accounts for 35% of unconventional gas production and about 53% of shale gas production in the US Land region this year. These 11 operators stand to lose more than $5 billion in 2022 if the average Henry Hub price strip remains at $4 per MMBtu – an amount that could double if Henry Hub prices average $5 per MMBtu.

The reason behind the expected losses is that the operators had already hedged more than half of their 2022 production by the time they reported their second-quarter results, when prices were trading much lower than the currently inflated levels. By the end of September, as much as 64% of their projected production was hedged.

To complete the picture and look beyond our research group, tight-oil-focused producers tend to hedge a lower share of their associated gas production than our peer group of public gas-focused producers. The hedging profiles of private shale gas-focused operators vary widely, but on average they behave in line with the researched peer group. Gas producers focused on cash flow from proved developed producing (PDP) resources in conventional fields tend to hedge only a limited share of their production. Still, some have a high percentage of fixed-price sales with deliveries to local markets.

In terms of total volumes, the associated gas contracts of tight-oil-focused public producers would be about 50% lower than those of the shale-gas-focused peer group. Still, their typical hedging floor is somewhat higher based on their third-quarter earnings. For private operators, there is lower visibility, but significant Haynesville private names tend to hedge well in advance, indicating low hedging floors.

“Given that the whole strip for 2022 currently remains above $4 per MMBtu – though a strong backwardation is present in the shape of the curve – the current state of the programs is likely to impose a material downward pressure on corporate cash flows of gas producers next year,” says Artem Abramov, Head of Shale Research at Rystad Energy.

Into the peer group

The share of hedged production for 2022 ranges from 10-11% for Coterra to almost 95% for CNX Resources. However, Coterra and CNX are clear outliers as the rest of the group’s share of hedged production is in a narrow 45-75% range. The weighted-average floor price varies in the $2.5-$3.1 per MMBtu range in Henry Hub terms. At these prices, we anticipate a strong impact of the recent improvement in the Henry Hub strip on floor prices when operators report their full-year results. At least two operators are among those who added some hedges for 2022 that recently saw material gains in the average floor price: Range Resources increased the average floor by $0.30 per MMBtu, while Chesapeake raised its weighted-average floor by $0.20 per MMBtu between the two quarterly disclosures.

The significant rise in hedged volume since the second quarter of 2021 is primarily driven by a handful of operators – Southwestern, Chesapeake, Range and Comstock. The inclusion of Cimarex Energy, as a part of Coterra Energy, also boosted the total. The new entity inherited Cimarex’s natural gas hedges as Cabot alone did not have any derivatives position for 2022 as of the second quarter. In addition, key operator EQT Corp. has seemingly terminated some of its low-floor hedging positions for 2022 over the past few months.

Rystad Energy estimates that an average Henry Hub price of $4 per MMBtu in 2022 will result in a total hedging loss of $5.2 billion on gas derivative contracts alone for the 11 companies analyzed. For context, the peer group is estimated to generate around $48 billion in pre-hedged hydrocarbon gross sales before royalty, and about $21 billion of upstream cash from operations in 2022, before factoring in hedging losses. Hedging losses at a $4 per MMBtu strip will therefore be equivalent to more than 10% of the group’s pre-hedged revenue and account for more than 25% of cash from upstream operations. If the Henry Hub price averages at $5 per MMBtu next year, hedging losses for gas peers will be almost double – at $9.8 billion. These producers will need a Henry Hub price of $2.4 or lower to see material hedging gains of an amount greater than $1 billion.