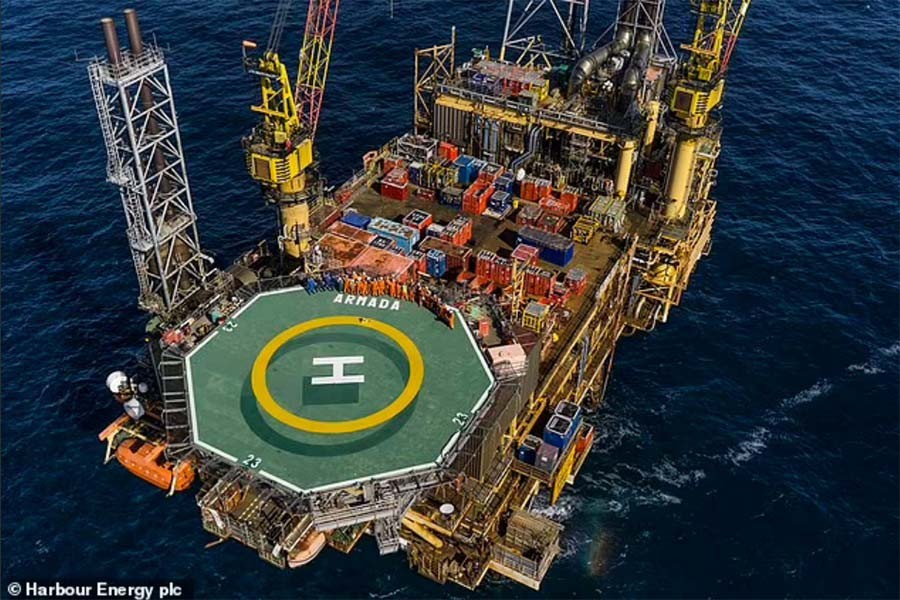 Harbour Energy has begun a share buyback scheme, returning cash to investors as surging energy prices accelerate a recovery in the company's finances.

Britain's largest independent oil and gas producer said it had made 'irrevocable, non-discretionary' agreements for its corporate brokers to conduct the $200million programme on its behalf.

The Edinburgh-based group has already introduced a policy to pay the same amount of money annually in dividends to shareholders, with the first $100million being handed out in May.

In a statement, the firm said it 'continues to employ a disciplined and prudent approach to capital allocation, balancing its three priorities of safeguarding the balance sheet, ensuring a robust and diverse portfolio and shareholder returns.'

Since being formed in April 2021 through the merger of Chrysaor and Premier Oil, the business has benefited from skyrocketing oil and gas prices amid considerable turmoil within the energy markets.

In its first-ever annual results as a listed business, Harbour reported overall revenue shooting up by nearly half from the previous year to $3.62billion as it was further boosted by higher production activity.

Thanks to lower impairment charges and operating costs increasing at a slower pace than income, the company rebounded from a £591million loss in 2020 to a profit of £76.8million last year.

Free cash flow also jumped by 21 per cent to £515million, helping net debts plunge by about $600million since the firm's merger was finalised.

Because of the strong performance, the group reduced its expected timeframe for becoming debt-free by two years. In a subsequently trading update in May, Harbour revealed debts had declined by another $600million to $1.7billion.

Harbour said it was on track to meet full-year production guidance of 195 to 210,000 barrels of oil equivalent each day at a cost of between $15 to $16 per barrel.

Chief executive Linda Cook hailed the company's 'strong start to the year,' adding that it would 'continue to invest in high return, infrastructure-led opportunities within our asset base to sustain production while at the same time generating material-free cash flow.'

She added: 'This, together with our robust balance sheet, provides us with significant optionality over future capital allocation.'

Yet a week later, the company's share price took a battering after Chancellor Rishi Sunak announced a windfall tax would be imposed on the oil and gas industry to help British consumers with soaring energy bills.

These bills were already going up last year as the relaxation of Covid-19 restrictions led to people travelling more regularly, but Russia's full-scale invasion of Ukraine led to a further escalation in oil and gas costs.

Analysts at Jefferies predict the new 25 per cent levy would increase Harbour's tax bills by $107million this year and $268million in 2023, even when discounting the tax relief for its investment budget.

Harbour Energy shares have fallen by over 19 per cent in the past month, though were up 1.6 per cent to 373.7p during the late afternoon on Thursday.