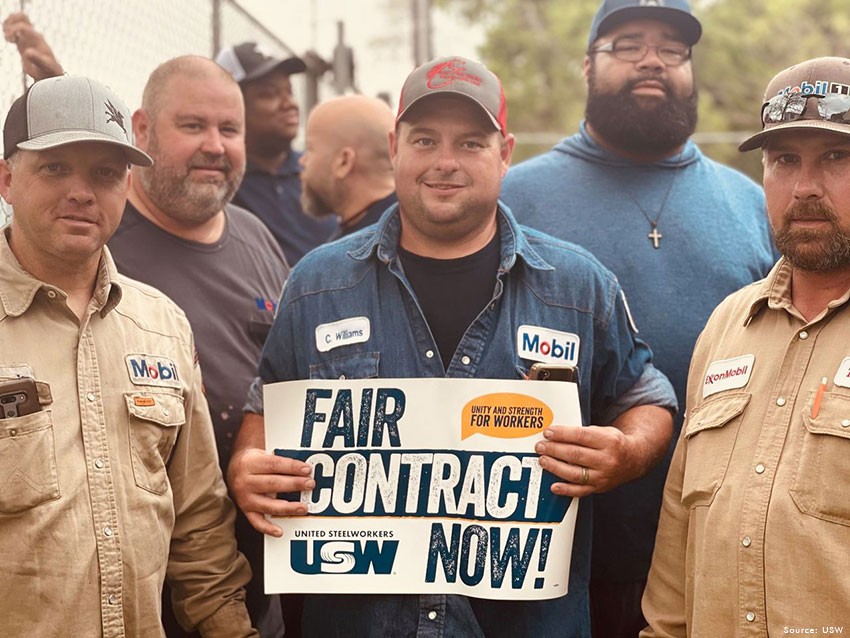 Oil giant ExxonMobil initiated a lockout of more than 650 workers at its Beaumont, Texas refinery and blending and packaging plant on Saturday morning after negotiations broke down between the company and the United Steelworkers (USW) union. USW officials agreed to the “orderly transfer” of the workers off of ExxonMobil’s property and have not called an official strike.

USW Local 13-243 and ExxonMobil met Friday night and Saturday morning, attempting to come to an agreement before the lockout began. By 1 p.m. Saturday, union representatives said more than 200 workers on their regular shift had been escorted out of the facility, two at a time. Some workers reported they had been forced to leave the property as early as the night before.

The USW and ExxonMobil began bargaining a new contract on January 11. The company demanded workers accept a proposal which included major changes to workers’ safety, job security, and seniority rights. On April 23, ExxonMobil announced its intention to lock workers out on May 1 if they did not agree to the givebacks. The USW asked for the current contract to be extended by a year, but ExxonMobil said it would not do so and demanded that the USW bring its contract proposal to a vote. The USW, knowing that workers would overwhelmingly reject another concessionary contract, opted instead to let the company lock out its members.

Workers gathered at a lot adjacent to the refinery and formed a picket line Saturday morning, carrying signs denouncing ExxonMobil’s actions. Health and safety are major concerns for workers at the plant and a major reason an agreement has not been reached. ExxonMobil claimed health and safety demands put forward by workers “would significantly increase costs” and limit its ability to remain competitive.

Last October, ExxonMobil, which had a market valuation of $174 billion at the end of 2020, suspended its contribution to employees’ 401(k) pension plans, citing the effects of the pandemic. At the time, a company spokeswoman said, “ExxonMobil’s total remuneration remains competitive despite the suspension.”

Oilworkers have been devastated by the COVID-19 pandemic. The slowdown of the global economy sharply drove down oil prices in early 2020, initiating a wave of mass layoffs in the oil sector. More than 118,000 energy workers were laid off worldwide between March and July in 2020, accounting for 15.5 percent of the industry’s workforce. Combined with the 200,000 job cuts from 2014-16, amid another crash in oil prices, the losses are staggering.

One of the most common causes of accidents as reported by workers is understaffing. Jobs in the oil industry are physically demanding and workers normally see 12-hour shifts plus overtime. Hazardous materials and heavy machinery create an environment with a high potential for workplace injury. More than 1,500 oil rig workers died on the job between 2008 and 2017.

There is also a looming mental health crisis among male workers in the industry, who die from suicide at a higher rate than workers in any other sector. Researchers have drawn a connection between the collapse of oil prices and suicide rates. The Meadows Mental Health Policy Institute in Austin, Texas estimated deaths of despair among oil and gas workers would rise by as much as 20 percent, due to consequences of the pandemic.

'We've had to go through the pandemic. We've had a couple hurricanes. We've had the ice storm. Our guys have done what was necessary to keep this plant up and running,' one worker said.

In a released statement, union officials stated one of ExxonMobil’s demands included eliminating seniority benefits, which the company would use to slash wages and force retirements. Experts estimate about half of the oil and gas workforce is “tenured,” with the majority nearing retirement.

USW District 13 Representative Richard “Hoot” Landry told the Beaumont Enterprise that the union was still planning on what to do next, and always intended to avoid a work stoppage. Landry claimed ExxonMobil locked out workers because the company wanted to maintain control of the situation. That is no doubt true. By preventing a strike and blocking a broader mobilization of oil and other industrial workers in support of the embattled Beaumont workers, the USW has given all the momentum to the energy giant.

During the 2015 strike by 6,500 Shell, BP, Tesoro and other oilworkers, the USW forced ExxonMobil workers to remain on the job, triggering widespread anger among Beaumont workers. The USW then signed a deal with ExxonMobil to separate Beaumont workers from the industry-wide pattern agreement and establish a different contract expiration date from thousands of other oilworkers.

At the time, one Beaumont worker told the World Socialist Web Site, “Here in Beaumont, ExxonMobil is demanding a five-year agreement to separate us from the rest of the national bargaining agreement. They want to give us a $4,500 signing bonus for labor peace during an expansion. If ExxonMobil doesn’t honor the [national] tentative agreement and all the other places have already settled, we are very anxious that the local will cave in because the USW International has left us out here alone.'”

The lockout of oilworkers takes place as thousands of workers across the US are engaging in struggles, which have pit them not only against the corporations and the government, but also the corporatist unions. Graduate student workers at Columbia University rejected a sellout contract endorsed by the Graduate Workers of Columbia, their union affiliated with the United Auto Workers union (UAW). Union officials presented workers with a contract that did not meet any of the students’ demands and included a “no-strike clause.”

At the same time, the UAW is sabotaging the two-week strike by nearly 3,000 workers at Volvo’s New River Valley heavy truck plant in Dublin, Virginia. The UAW instructed workers to return to work Sunday night without voting or even seeing the tentative agreement the union reached with Volvo. Workers at the plant initiated the Volvo Workers Rank-and-File Committee in direct opposition to the union.

Workers must draw the necessary conclusions. For their struggles to move forward, control cannot be left in the hands of the pro-company and nationalist unions. The International Committee of the Fourth International (ICFI) and its affiliated Socialist Equality Parties around the world have called for the formation of the International Workers Alliance of Rank-and-File Committees (IWA-RFC) to unify and coordinate the growing, global opposition of the working class.

It is imperative that workers develop new forms of independent, democratic and militant rank-and-file organizations in factories, schools and workplaces to break the shackles imposed on them by the reactionary unions. We urge oilworkers and other workers to contact the WSWS for more information on how you can join this fight.