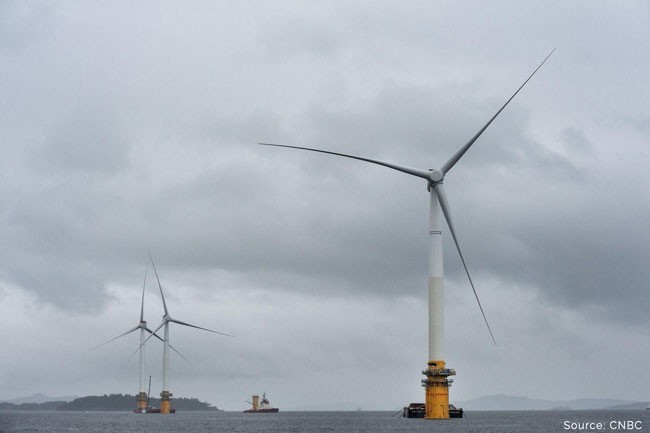 Equinor: Continuing The Growth In Renewables

In various past articles on Norwegian energy giant Equinor ASA I discussed how the company's expansion into green energy would prove to be a net positive for the firm's forward growth. Thus far, Equinor has been mostly focusing its efforts into offshore wind farms, although the company has also been making investments into solar energy. We saw the company continue with its green energy ambitions earlier today when the company announced that it has entered into a consortium intent on constructing an offshore wind farm in South Korea that could end up being the largest such farm in the world. This also represents the company's first move into Asia, at least as a green power provider, which could prove to be a very profitable move for it.

As just mentioned, the project in South Korea as envisioned would be the largest floating wind farm in the world.

As envisioned, the facility to be constructed is a 200-megawatt floating wind farm located off of the coast of Ulsan, South Korea. It will be developed by a consortium consisting of Equinor, the Korea National Oil Corporation, and Korea East-West Power. It is important to note though that at this point in time no decision has actually been made about whether or not the companies will proceed with the plan. This is because at this point all that they have agreed to do is conduct a feasibility study to determine whether or not it makes any economical sense. Thus, it is certainly possible that nothing will come out of this. If the companies do decide to proceed though then we should see this farm start producing power sometime in 2024 and thus begin generating money for the firms around that time.

This project, assuming it is constructed, would be the first floating wind farm in Asia. As such, it could prove to be an important development for the region. This is due to the fact that various governments in Asia, most notably South Korea and China, are actively seeking to reduce the carbon emissions of their various power generation activities. If this project is successful then it could lead the governments of these nations to encourage more offshore wind development projects. As Equinor is a leader in this area, this could result in growth of the company's green energy business.

Perhaps curiously, the CNBC article that discussed the announcement only made mention of the 30-megawatt Hywind Scotland farm in terms of other wind farms operated by Equinor. Hywind is the first full-scale commercial floating wind farm that was ever constructed worldwide but it is not the only offshore wind farm owned by Equinor in general. Equinor currently has seven wind farms either in operation or under construction: 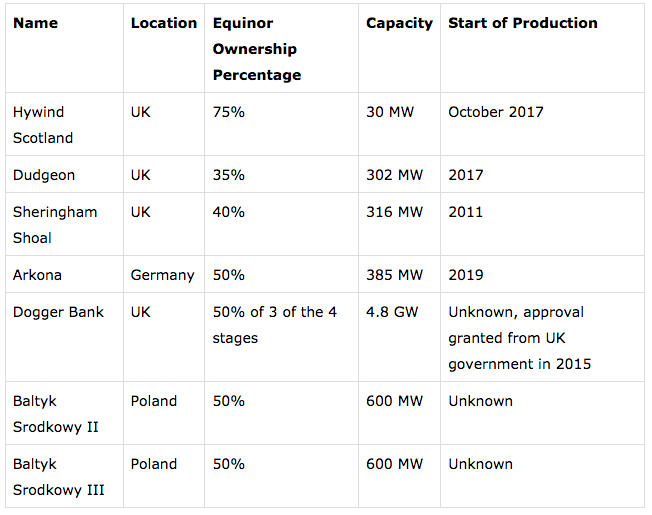 Please note that this chart does not include projects that have not yet begun construction such as the just discussed one in South Korea. The company is also researching potential opportunities in Brazil, the United States, and elsewhere. Clearly then, we can see that this is an area in which Equinor is investing considerable time and effort to expand its operations.

The Potential Of Renewables

It does make a lot of sense for Equinor to be investing in its renewables business in addition to the company's legacy oil and gas business. This is due to the fact that renewables are likely to see much better growth than fossil fuels over the coming decades. The U.S. Energy Information Administration pointed this out in its 2019 Annual Energy Outlook: 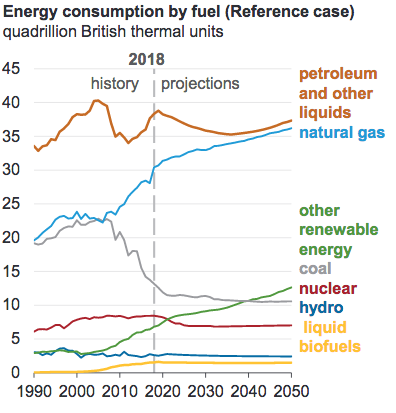 As we can see here, the agency states that the only two sources of energy that are likely to see consumption growth over the next thirty years are natural gas and renewables, while oil consumption is expected to remain flat. Of the two that are expected to see growth, natural gas will see more in absolute terms while renewables are expected to see more growth in percentage terms. For the most part, as investors we are more concerned with percentages than absolutes because this is more relevant to what we actually experience in our portfolios. The EIA's predictions however only apply to the United States while Equinor's renewables business is international. However, the same trends are generally true internationally. BP pointed this out in one of its earnings presentations:

Equinor has been more active than most other major energy companies at developing its renewables business. Ultimately, this could prove to be a competitive advantage for the company going forward since it already has a head start over its peers at exploiting this emerging industry.

The Energy Information Administration does suggest that most renewables growth, in the United States at least, will be in solar. We can see this here: 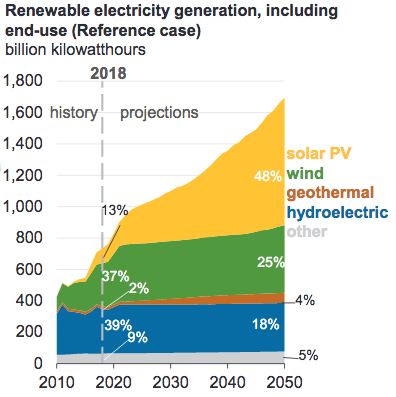 While Equinor has certainly been more active in offshore wind, it has not ignored the solar space. Indeed, back in November, the company acquired a 9.7% stake in Scatec Solar. Scatec Solar is a fairly major developer of solar farms, including a few in South America. Equinor had previously acquired a stake in a few of these farms prior to making a move to acquire part of Scatec itself. This clearly illustrates that the company is moving quite rapidly to position itself in the new clean energy revolution.

Despite all of this, Equinor is generally valued as just another oil company. As we can see here, the company's stock performance year-to-date has been largely similar to the iShares U.S. Energy ETF (IYE): 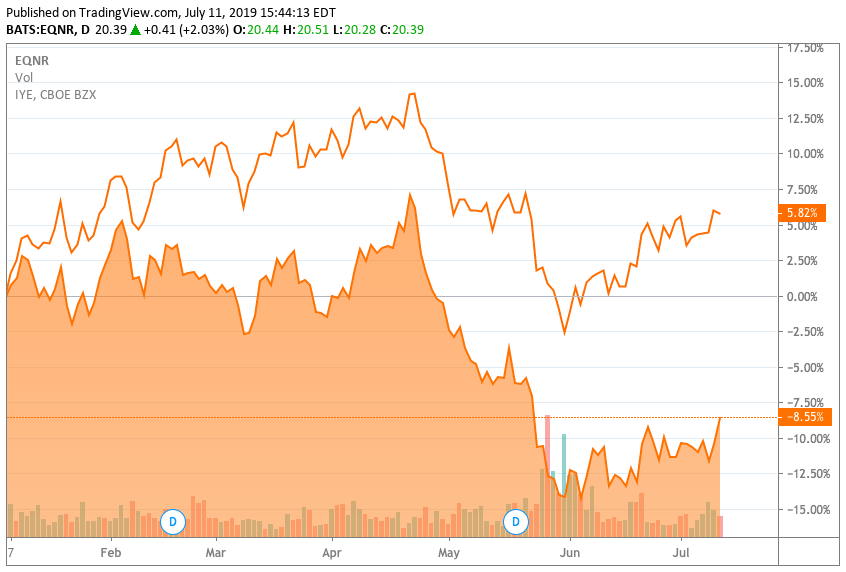 Indeed, in terms of percentages, Equinor has underperformed the ETF, delivering a return of -8.55% to the ETF's -5.82%. This is despite Equinor having strong growth prospects in both the fossil fuel and renewable energy spaces. This could be an opportunity for investors.

There are other factors that argue against there being an opportunity here. One method that analysts frequently use to value a company like Equinor is the price-to-earnings growth ratio. This is an adjustment to the more familiar price-to-earnings ratio that takes a company's forward earnings growth into account. However, according to Zacks Investment Research, Equinor is expected to see its earnings per share decline over the next three to five years. Thus, this ratio would also be a negative number and essentially point to the stock not being a particularly good buy right now. I will admit though that the push into renewables as well as likelihood of production growth from its fossil fuel projects do add up to an intriguing proposition.

In conclusion, Equinor's recent announcement shows that the company remains highly committed to developing and expanding its renewable energy business. This could provide the firm with some solid opportunities due to the expected growth in the renewables sector in general over the next few decades. However, the market seems to ignore the company's renewable energy unit in general, valuing it instead in the same way as any other fossil fuel company. This might be creating an opportunity for investors, despite the fact that analysts do not expect the firm to deliver any earnings growth in the near future.