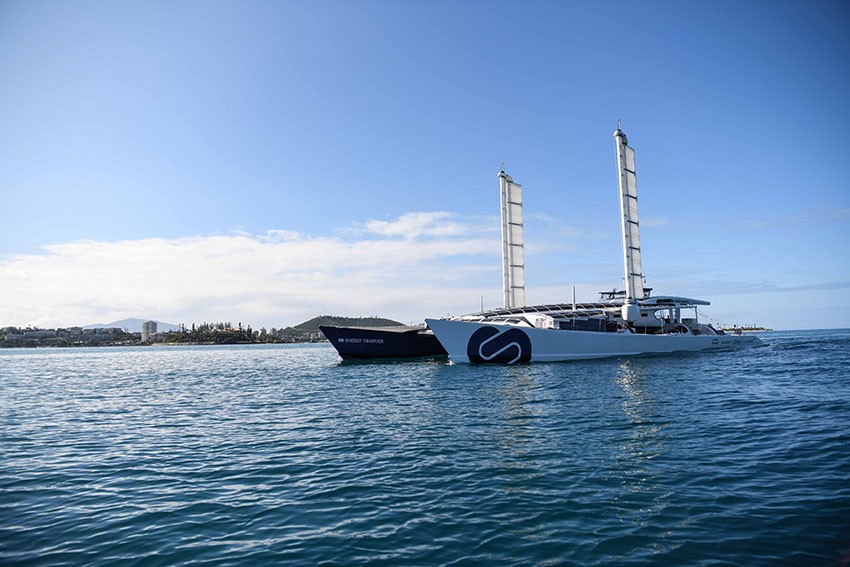 Since leaving its home port of Saint-Malo in 2017, Energy Observer undertook a 7-years round-the-world Odyssey that will continue until 2024. Arriving in New Caledonia on 16 July, the ship already sailed over 40 000 nautical miles, made 68 stopovers - 15 of which with its educational exhibition - and visited 30 countries. The ship, before becoming a laboratory for the energy and ecological transition, was a legendary multiple award-winning catamaran. Today, Energy Observer is designed to push back the limits of zero-emission technologies. Hydrogen, solar, wind and hydrogeneration, all solutions are being tested and optimized in order to make clean energies a reality for all.

Energy Observer, the only one of its kind

Energy Observer is an experimental platform for the energy sources of tomorrow. A revolutionary ship that navigates without damaging the planet. Its electrical propulsion is powered by renewable sources: sun, wind and water currents. What makes it so unique is its ability to store the energy excess in hydrogen form; a hydrogen produced directly onboard from seawater, a technology that allows for total energy autonomy at sea. Today it is necessary to give meaning to innovation, so that is serves to solve the challenges faced by humanity. » Victorien Erussard, Captain and founder of Energy Observer.

Energy Observer, the first hydrogen ship to sail around the world, left Hawaii on the 20th of June and proved once again that energy autonomy is essential: 3,366 nautical miles (average speed: 5,6 knts) to cross the Pacific Ocean and reach New Caledonia. The journey took 25 days, relying only on the energy the ship can create, the hydrogen she stores and the wind in her sails.

This French territory located 17,000 km away from Metropolitan France is a large archipelago in the southwest Pacific Ocean. Grande Terre, the main island, harbours the second largest reef system in the world after the Australian Great Barrier Reef. However, the neo-caledonian coral reefs and lagoon surpass the Great Barrier Reef in coral and fish diversity. A unique ecosystem listed as a UNESCO World Heritage Site.

Despite its natural resources and abundance of renewable energy sources, New Caledonia was still 97% dependant on fossil fuels in 2019, with over 5 200 000 tons of CO2 emitted per year (source: Agence Calédonienne de l’Énergie). However, the government aims to reduce the collectivity’s CO2 emissions by 35% and double the renewable energy production by 2030. Energy Observer arrives in the archipelago to investigate the actions being undertaken to reach these green goals.

An Odyssey to accelerate the energy and ecological transition

Humanity today faces numerous challenges around the globe, and Energy Observer mission is to accelerate the energy transition through innovations. By showcasing that the embarked technologies are performant and resilient to the most extreme environments, the project proves they can be applied at various scales on land and at sea.

As the first French ambassador for the UN’s 17 Sustainable Development Goals, the voyage also aims at exploring all the solutions facilitating the ecological transition. Believing that information is key to action, Energy Observer reaches out to all audiences and raises awareness through educational events and media contents (documentaries, web-series, articles, exhibitions …).