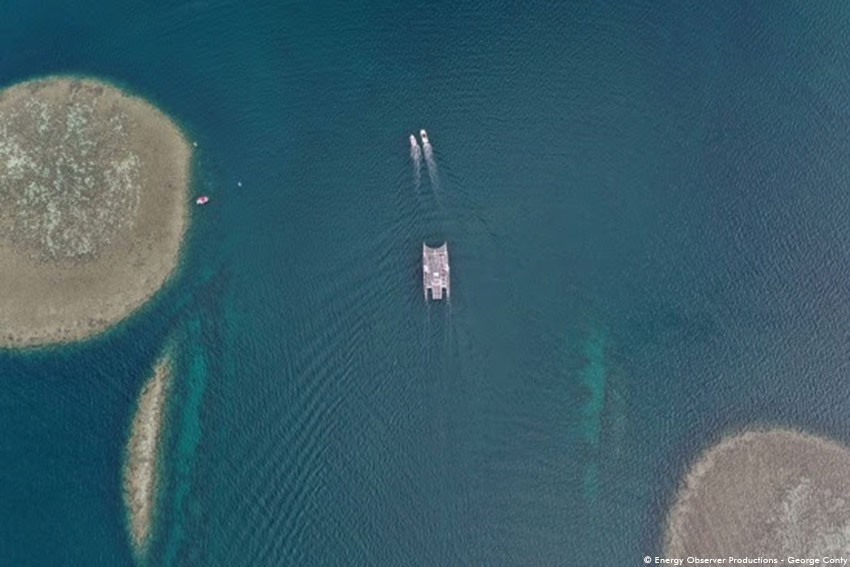 The course of Energy Observer’s Odyssey is set to evolve in line with health guidelines in force in Asia in particular. In this way, the Tokyo stopover will now take place in December 2021 rather than during the Olympic and Paralympic Games, with certain destinations in south-east Asia initially scheduled for 2022 being brought forward to this summer and autumn.

Energy Observer has taken the decision to postpone its stopover in Tokyo – originally programmed during the Olympic and Paralympic Games – until the end of this year. Indeed, given the difficult health context, which is prohibiting international visitors, limiting public audiences during the events and above all leading to the cancellation of numerous events and activities on the fringes of the Olympic and Paralympic Games, the appeal of Energy Observer’s stopover in the city on the dates initially scheduled has been greatly compromised. As such, it is with the wholehearted consent of its partners, the local Japanese and French institutions, that Energy Observer has chosen to push back its Tokyo stopover until this coming December.

Japan, a major Asian stopover for the Energy Observer Odyssey

In line with this new schedule, the Energy Observer catamaran, the first hydrogen-powered vessel to circumnavigate the globe, as well as its mobile exhibition village dedicated to energy and ecological transition, will be present in Tokyo Bay in early December 2021. By this time, conditions should be much more favourable for Energy Observer to play host to a wide public audience, students from schools and universities, industrial protagonists, decision-makers and local organisations in its exhibition village, a showcase for renewable energies and hydrogen. The main aim of Energy Observer is to speed up energy and ecological transition by demonstrating how its own on-board systems make it possible to combine renewable energies and store the energy produced through the notable use of green hydrogen, which is produced aboard the boat.

Japan’s infatuation for hydrogen dates right back to the seventies, in the wake of the first oil crisis, resulting in massive investment in fuel cell technologies from the nineties onwards. Since the Fukushima catastrophe, the country has been prioritising hydrogen as an energy vector for its mobility and its future city, as evidenced by its spectacular initiatives in this field. Indeed, considerable funding has gone into developing transport and infrastructure based around its use. The country’s core strategy unveiled in 2017, followed by the road map adopted in 2019, make provision for a hugely diverse range of uses for hydrogen, together with massive production capabilities to make it competitive with other fuels. Therefore, it is a key stopover in Energy Observer’s journey.

Self-sufficiency more essential than ever

As demonstrated in the spring of 2020, Energy Observer will once again need to prove how adaptable she is. At the start of the pandemic, the vessel set sail from the town of Saint Malo in northern Brittany just as Europe was battening down its borders to embark on a 4,500 nautical mile passage bound for Martinique. Today, with the catamaran casting off from the archipelago of Hawaii, her capacity for self-sufficiency in terms of energy is crucial yet again: 3,380 nautical miles (6,250 km) will have to be covered in her negotiation of the Pacific Ocean on a course to New Caledonia. The voyage began on 20 June and will likely take 23 to 27 days, during which time the crew will not be able to set foot on land due to a series of compulsory quarantines making the area inaccessible. This equates to 27 days relying solely on solar and wind energy, which the vessel stores in the form of hydrogen.

Fresh horizons in the Pacific

With the new itinerary for the vessel will come a good grasp of the issues faced by the Pacific island nations and a better understanding of their specific energy-based challenges in terms of energy independence and security, the preservation of ecosystems and dealing with the impact of climate change. Often considered by westerners to be a heavenly holiday destination, a large proportion of these islands are at the forefront of the struggle to combat climate change. Having only had a marginal influence on the global increase in temperature, these populations are having to deal with its repercussions on a daily basis, whether it be the rise in sea level or the increase in water temperature, which is bleaching their reefs. Many inhabitants are witnessing the disappearance of their natural resources at an alarming rate, an urgent sign of the need for global ecological transition. Energy Observer is keen to meet face to face with these sentinel populations and study the different solutions they are working on.

In this way, her journey will take her crew to New Caledonia and the exploration of the largest reef system in the world after the Great Barrier Reef, a unique ecosystem which is inscribed as Unesco World Heritage. This archipelago is still highly dependent on fossil energies but eager to reduce its CO2 emissions by 35% and double its renewable energy production by 2030.

Energy Observer will then set a course for Milne Bay in Papua New Guinea, an independent nation that boasts the richest marine biodiversity in the world, to discover how its population cope with the impact of climate change day in day out.

From there, the crew will make for New Guinea, the western half of which has formed part of Indonesia since 1962, but not without its share of political tensions linked to an abundance of resources as the island is home to the world’s largest gold mine and the second largest copper mine. For scientists, the region is also a haven for biodiversity where the flora and fauna of Asia and Oceania come together as one in what is known as the biogeographical region of Wallacea. Out to the west, the Bird's Head Peninsula lies at the epicentre of marine endemism with over 70 species of coral, reef fish and crustaceans which do not exist anywhere else on our planet. It is a region which suffers from overfishing, yet the local populations of Papua New Guinea, the Indonesian government and dozens of NGOs have created a network of marine protected areas there spanning 3.6 millions hectares.

Finally, the crew will make for the Philippines, the final stopover before Japan, where Manila, the eighteenth most densely populated city in the world in an archipelago boasting over 7,100 islands, is under serious threat from climatic, environmental and social issues.