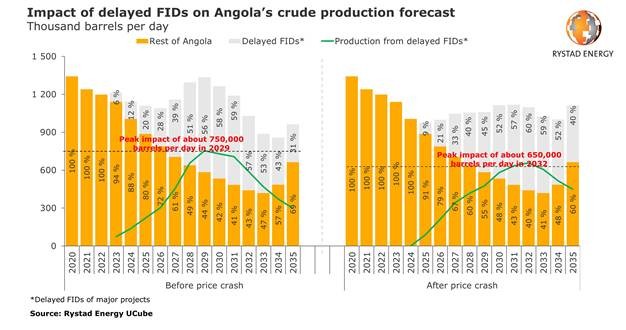 Angola’s oil output averaged 1.38 million barrels per day (bpd) last year and was forecast to reach 1.4 million bpd in 2020. Despite its robust level, the country has long realized that its existing production is on track for years of consecutive decline – deepening from 2021 – and introduced a new royalty and tax regime to attract investments from the majors.

The incentives were set to help Angola recover its declining production and add a peak of 750,000 new bpd in 2029, Rystad Energy estimates. The extra barrels, together with what remains from the country’s current production, would have driven total output very close to 2020 levels.

However, Covid-19-induced capital spending cuts may have thrown a wrench into the country’s plan for a bright oil and gas future. Projects which were in the pipeline have now been delayed and exploration plans are being shelved. And in the current market situation, Angola faces stiff competition from the other deepwater markets such as Brazil and Guyana.

Because of the new market reality, Rystad Energy now estimates that instead of rebuilding Angola’s lost output by 2029, the country will likely never manage to produce at current levels again. As a result, the estimated peak of new cumulative output will shrink to 650,000 bpd, and will only be reached in 2032, at which time output from currently-producing projects will have continued to fall from 2029 levels.

Angola added over half a billion barrels of recoverable crude oil volumes to the country’s coffers in 2018 and 2019. Projects in the country, along with many other Western African nations, were among the first to be put on hold since these were relatively high-cost offshore projects. The same projects which were deemed profitable under the new tax incentives have now been put on the backburner.

When it comes to exploration, Angola had grand plans. The National Agency for Petroleum, Gas and Biofuels (ANPG), was created as an industry regulator in the country in 2019 and plans were formulated to offer 10 frontier offshore acreages in the Namibe and Benguela basins at the end of 2019. A six-year (2019-2025) licensing strategy where 55 blocks were to be put on offer was created. Additional licensing in different modes was also in the works.

Instead, ANPG has decided to postpone the country’s 2020 licensing round, which was originally supposed to be launched by May 2020. Adding insult to injury, the oil price crash has led all the majors operating in Angola to ditch or leave their drilling rigs idle.

“Angola desperately needs to accelerate its new developments to reduce its declining production and must undertake more exploration to replace its depleted reserves. Despite the government’s efforts to make operations in the country more operator-friendly, investors may quit Angola unless the government acts swiftly,” says Siva Prasad, senior upstream analyst in Rystad Energy.

It remains to be seen how the government responds and whether it offers any additional motivation in the form of fiscal changes and operational incentives to keep investors interested.