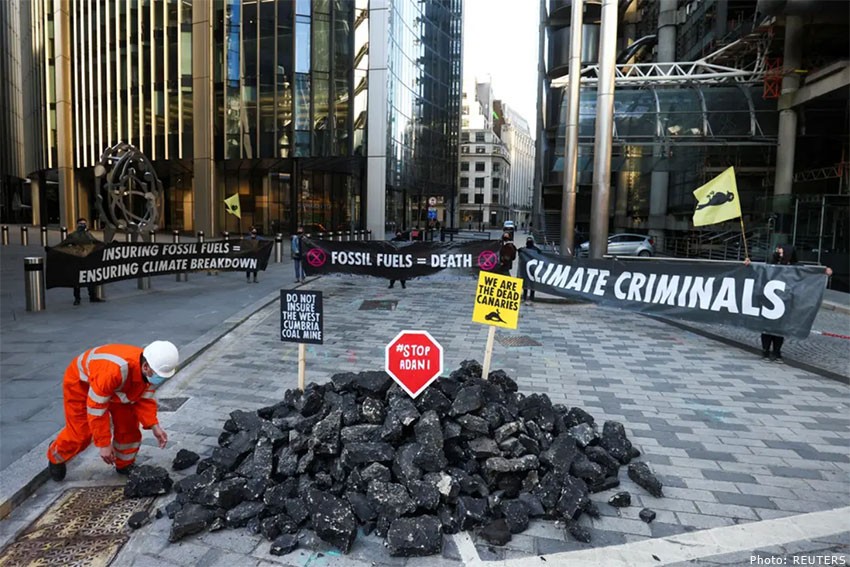 Climate activists dumped fake coal outside Lloyd's of London's headquarters on Friday, targeting the global insurer in a protest against the industry's backing for major fossil fuel mining projects.

Activists from the Extinction Rebellion group unfurled banners with slogans including "Climate Criminals" and dumped the blackened boulders in the road outside the building on Lime Street in the heart of the City of London.

The group said that Lloyd's facilitated the fossil fuel industry.

Lloyd's, the world's leading insurance and reinsurance marketplace, could not be reached for immediate comment.

Some major Lloyd's insurers have ruled out insuring the Carmichael mine, from which Adani plans to start producing 10 million tonnes of coal per year from 2021.

Lloyd's has asked members to stop providing new insurance cover for thermal coal, oil sands, or new Arctic energy exploration from Jan. 1, 2022, with a target of 2030 to phase out the renewal of existing cover.

Extinction Rebellion wants to prompt a wider revolt against the political, economic and social structures of the modern world to avert the worst scenarios of devastation outlined by scientists studying climate change.

Activists from the group smashed the window frontage of HSBC's headquarters in Canary Wharf on Thursday and two weeks ago shattered windows at Barclays .

On Thursday, the United States and other major industrialised countries hiked their targets for slashing greenhouse gas emissions at an Earth Day global climate summit hosted by President Joe Biden.